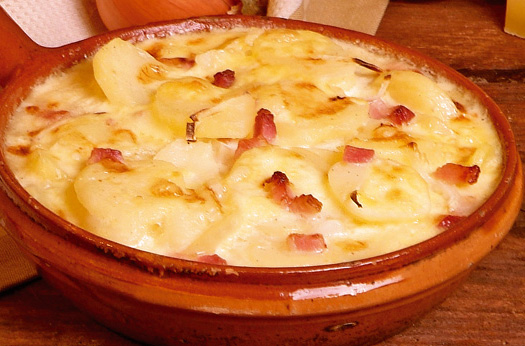 Tarteflette is ubiquitous on menus in the chalet restaurants that dot the ski slopes of the Haute Savoie in France. However, the origins of the recipe are a little blurred.

The French Haute Savoie region borders Switzerland.  Over the centuries the border was often disputed and so today is the exact location of the dish’s origin: the Swiss claim they first created it, the French claim it’s theirs.

Whoever it belongs to, it’s essentially a local interpretation of a potato gratin, a rustic dish made with layers of starchy, buttery potatoes; crispy, salty bacon; caramelised onions; and the region’s beloved Reblochon – a soft, creamy, slightly nutty-flavoured, oozy (and extremely pungent!) local Haute-Savoyard cheese.

Even the cheese has its own unique and clandestine history, which sets it apart from its more mainstream gooey French counterparts, Brie and Camembert…

During medieval times, Alpine dairy farmers had to pay taxes to the owners of the pastures.  The amount they paid depended on their daily production of milk.  To avoid paying in full, they would milk their cows most of the way and pay their dues.  Then under cover of darkness, they would milk their cows a second time, drawing a richer creamier milk perfect for cheese-making.  Indeed, the word reblocher means ‘to milk a second time’.

Although traditional Tartiflette is based on an ancient Haute-Savoyard recipe called “pela”, it was apparently created less than fifty years ago by the Reblochon trade union to promote sales of the cheese.  It is now one of the signature dishes of the region, and an absolute staple of most ski resorts.

Tartiflette makes a moreish supper dish for kids or a hearty wintry lunch for hungry skiers/boarders.  Its traditional accompaniments are charcuterie, gherkins and pickled silver-skin onions. A plain green salad also always goes down well, dressed in a mustardy vinaigrette.

Method
Cook the potatoes in boiling salted water until just tender, then drain. When they are cool enough to handle, slice them. Heat half the butter and half the oil in a frying pan and sauté the potatoes gently until they are golden. Season and put in a shallow ovenproof dish.

Heat the rest of the butter and oil in the same pan and fry the lardons over a fairly high heat to colour them. Turn down the heat, add the onion and cook slowly until soft and beginning to colour. Next add the garlic.  Continue to cook for a further couple of minutes. Add this to the potatoes and combine.  Finally, pour over a good slug of double cream.

Slice the reblochon thinly (some people remove the skin but we like to leave it on for extra flavour) and lay on top of the potato-bacon-onion mixture.

Tweet us @FamilySkiNews, or let us know how you get on serving it to your family on our Facebook page, and be sure to come back again over the next few weeks as we add more mouth-watering dishes.