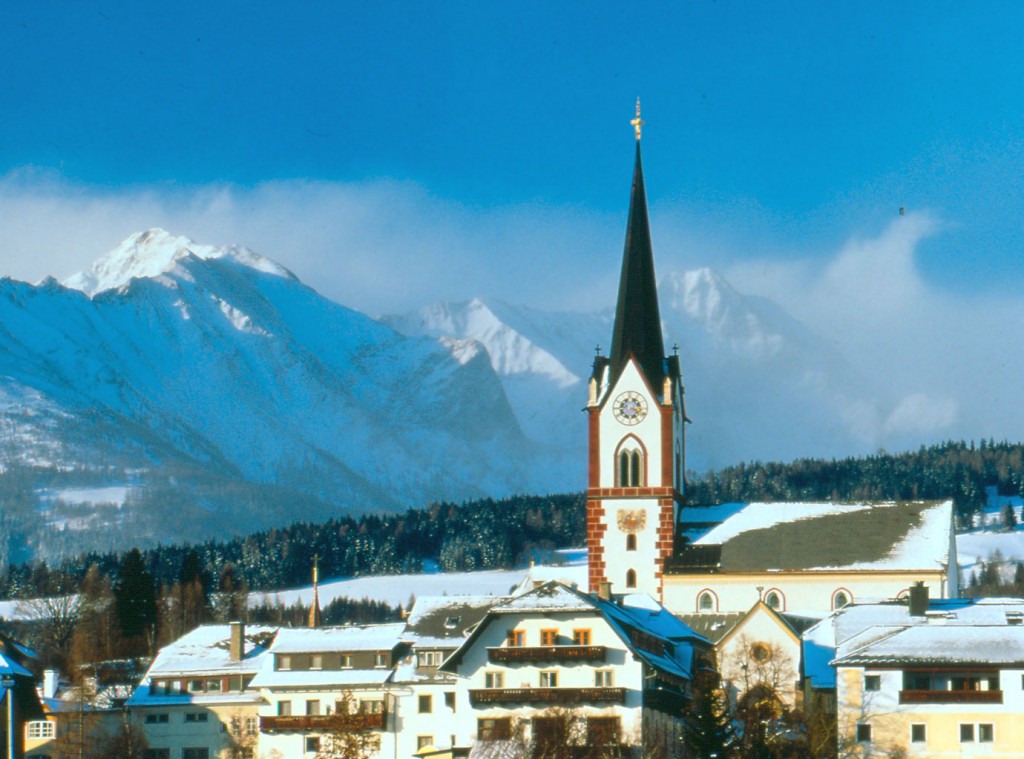 The village of Oberndorf

There’s a special magic about Christmas in Austria with snow glittering in the mountains and the picturesquely decorated villages sparkling with light and warmth.  Hardly surprising that on Christmas Eve 1818 in Oberndorf, a delightful village just outside Salzburg, two men inspired by the Christmas atmosphere, composed a simple song to celebrate Midnight Mass:

“Silent night, holy night,
all is dark, save the light…” 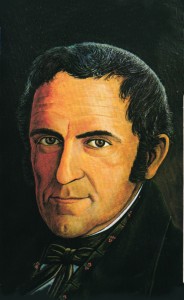 It was Joseph Mohr, the village priest, who initially suggested the idea of a carol to local organist and school-teacher, Franz Gruber.  Mohr then settled down to write the text and delivered it to Gruber at his home in the neighbouring village of Arnsdorf during the afternoon.  By the evening Gruber had produced a musical arrangement for 2 solo voices and choir, accompanied by a solo guitar.  That magical night, as the carol was first performed in the village church at Oberndorf, nobody knew that it was to become one of the most popular Christmas carols in the world.

Oberndorf today remains a small, typically Austrian village, 20 kilometres from Salzburg, on the river Salzach near the Austro-German border.  It makes a perfect spot for exploring the region without paying the extortionate prices commanded by hotels in Salzburg.  At Christmas, Oberndorf becomes a tourist honeypot.  However, perhaps surprisingly, this actually enhances its charm, with visitors seeking a special, traditional Christmas celebration. 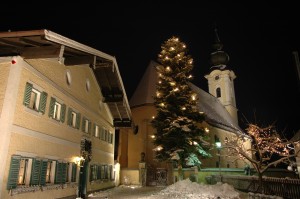 The main attractions in the village include the Heimatmuseum, documenting the history of the carol and how it spread worldwide; Gruber’s apartment in the village school in Arnsdorf and Oberndorf’s Stille-Nacht Gedächtnis Kapelle (Silent Night Memorial Chapel), consecrated n 1937 after the original village church was destroyed following a serious flood. 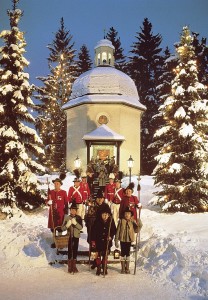 This tiny, round chapel with its delightful pepperpot roof, contains fine stained-glass windows portraying Mohr and Gruber, and a copy of the composition (the original is in the CarolinoAugusteum Museum in Salzburg).  It plays host to one of Austria’s most moving Christmas experiences: a Gruber-Mohr memorial walk from Arnsdorf to Oberndorf at 4pm, followed by a special service in front of the memorial chapel at 5 pm, with a performance of the original version of “Silent Night”.

Other Christmas events in the Salzburger region include local Weihnachtsmarkte (Christmas Markets) and several special Advent Nikolofahrten (St Nikolaus steam train trips) in early December, when Santa climbs aboard to join the children and hand out presents; horse-drawn sleigh rides through the surrounding countryside; and numerous Christmas exhibitions. 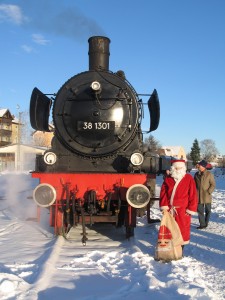 All aboard the Santa Express!

There are nativity plays, concerts and on some evenings you can join in with the ancient Anglöckeln festivities.  In the old days, the men who worked on the river in the summer went without work in the winter, so they used to go from farm to farm, ringing bells (anglöckeln) and asking for presents to survive the long, hard winter.  The custom was revived in 1924 with the citizens of Oberndorf, no longer hungry and poor (thanks to the thriving tourist trade), parading through the ornately-decorated streets, carrying lanterns and a crib on a 2-metre high pole, to the accompaniment of carols, Glühwein (mulled wine) and warm gingerbread.

Indeed the entire Salzburg region maintains many unique, old-fashioned celebrations at Christmas.  The tradition of decorating trees stems from here, initially with paper roses, apples, marzipan, honeycake, figs and golden nuts, before the 1880s when glass decorations became popular.  Advent calendars also originate from Austria, said to have started at the end of the last century after a mother attached 24 pieces of cake to a piece of decorated cardboard to keep her children happy until Christmas. 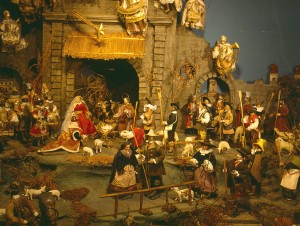 Salzburg starts to prepare for Christmas as soon as the last of the summer tourists have left, building up to its famous Christkindlmarkt, which has to a large extent managed to resist the lure of Christmas kitsch, offering traditional gifts of local wood, glass and other handicrafts.  Amidst the merrymaking, you may meet Nikolofrau (as St Nikolaus is married in Austria), the evil Krampus, collecting naughty children in  his giant rucksack and the Klaubaufs, ugly, hairy creatures who try to get food and drink from the houses they raid, whilst Popper and Popperin try to protect the citizens.

On 5 December in the village of Rauris, just outside Salzburg, the Schiachperchten resemble scarecrows in giant peaked hats, masks, bells and ragged clothes as they run riot with their brooms, scissors and large baskets to carry away bad children.  If you dare to spend Christmas here, make sure your kids behave!

Salzburg is served by many no frills airlines, including Easyjet, Flybe and Jet2, as well as British Airways and Austrian Airlines, making it an easily accessible destination from many UK regional airports.  Flight time is around 2 hours from London.  Oberndorf is just a 20km train ride from Salzburg.