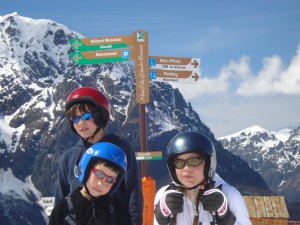 In recent years, many countries and ski areas have made great efforts to promote and encourage the use of helmets on the slopes, especially among children.

In Switzerland, around 80% of the on-slope population wear helmets.  A law was passed in Italy as long ago as 2005 insiting all children under 14 wear helmets and, two years later, Austria followed suit in some of its resorts.  The Ski Club of Great Britain recommend helmets are worn by all children under 13 years.  In the USA, helmet use increased in the 2009/10 season to 57% of skiers and boarders  (a 9% rise on the previous year), with higher rates in children (77% of children aged 9 years or under wore a helmet).  A number of states (including Colorado, New York and New Jersey) are currently considering the introduction of mandatory helmet-use laws. Aspen and Crested Butte now require kids aged 12 and under who are enrolled in ski/snowboard school to wear helmets.  Vail Resorts require parents to sign a release form if they don’t want their children wearing one whilst in ski/board school.

It is important to keep things in perspective.  Head injuries account for only 10-20% of all snow-sports injuries (although some reports have shown higher rates in children).  Most of these injuries are minor (usually concussion); the more severe injuries are usually the result of out-of-control skiing/boarding. 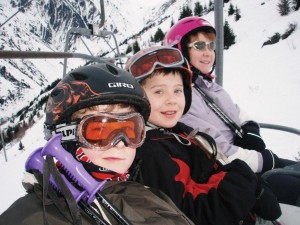 Helmets for all the family

Here at FamilySkiNews.com we feel if the risk of head injury can be reduced, then it should be.  It has been proven that helmets can reduce the risk of injury to the head.

We’ve also established that head injuries among slope-users are relatively uncommon.  But, when they do happen they can potentially be devastating (resulting in coma, brain damage, paralysis, even death).  Surely that’s good enough reason to make your kids wear a helmet, and to put a lid on your own head too?…  (and, on a cheerier note, they’re warmer than a woolly hat).

Arguments against wearing one

Some people believe that helmets may increase the risk of a neck injury when skiers/boarders fall, especially children who have a greater head-to-body ratio.  However, in February 2010 a 10-year case-control study (by Brent Hagel and colleagues of Alberta Children’s Hospital) reported in the Canadian Medical Association Journal, revealed no evidence that wearing a helmet predisposed the neck to a greater risk of injury, concluding that helmets were beneficial, reducing skiers’ and snowboarders’ risk of head injury by 35%.

It is sometimes argued that helmets may interfere with your peripheral vision; or with your sense of hearing, making it difficult for you to hear sounds of impending danger, such as another slope user about to crash into you or the initial sounds of an avalanche. Neither of these have been proven, while the wearing of an MP3 player/ipod-type device while skiing or boarding almost certainly will reduce your sense of awareness on the slopes and will make you less able to hear any warning shouts, let alone the quiet hissing noise made by the skis/board of another slope-user passing closely by or breaking near you. 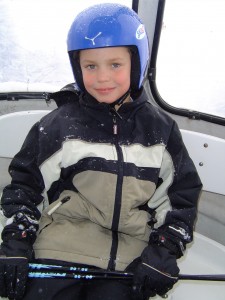 Happy in a helmet!

Although helmets reduce the incidence of minor injuries, to date there is no hard evidence that wearing one will prevent death or serious injury on the slopes.  Nor has there been a reduction in skiing or snowboarding fatalities since the introduction of helmets.  It has been proven in safety tests that a helmet would need to be 18cm thick, 50cm wide and weigh at least 5kg (unlike any ski helmet on the market!), to protect the head properly against a direct impact blow at 30mph, and most intermediate skiers regularly travel at considerably higher speeds than that.

Some people believe that wearing a helmet could make you take more risks that you would do without one.  Consider these wise words from American ski-safety guru Carl Ettlinger from Vermont: “When you feel that rush of adrenalin while skiing/snowboarding, ask yourself if you would be doing what you are doing if you were not wearing a helmet.  If the answer is NO, maybe you should reconsider the activity”.  That said, an editorial in the BMJ (British Medical Journal) in 2011 concluded that the use of a helmet is not necessarily associated with a higher level of risk-taking but primarily with a higher level of skill.  Certainly in theUSA, statistics prove that helmet usage increases with ability level.  Only 26% of beginners wore a helmet last year, compared with 55% of advanced slope-users. 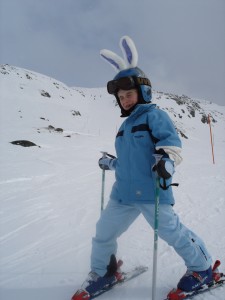 Kids often complain about having to wear a helmet – “it’s too hot, it’s not comfortable, I feel claustrophobic, I can’t hear, it looks stupid…”  Of course, no child wants to appear uncool, yet they are the ones who most need to be wearing a helmet.  Nowadays, there are many different shapes, colours and styles on the market, so you should easily be able to find one that fits your child… even the fussiest, most fashion-conscious teenager.  There are even jolly helmet covers ranging from tasteful fur trims to Viking hats and panda bears.  See our Hats & Helmets section for some of the latest designs.

Helmet or no helmet? – our conclusions

Here at FamilySkiNews.com we always wear helmets and we would always recommend others to do so too.  However, until helmet wearing becomes mandatory, it remains your personal choice whether to or not, and a question of careful risk calculation.

There is good evidence to indicate that a helmet may help to reduce the incidence of minor and moderate head injuries on the slopes, but they will not necessarily protect the foolhardy skier who pushes their limits or who skis too fast.  Controlling your speed is a critical safety factor on the slopes.  Helmets would appear to be most protective in incidents involving low speed impacts (below 15mph), or for falls which lead to blows to the head on the snow surface.   Just think how many cyclists wear helmets these days?  Most of them, of course… yet the average skier travels faster than the average cyclist.  And when it comes to accidents on the mountain, it’s not necessarily what you might do on the slopes, but what others might do to you!

The argument in favour of helmets is even greater for kids, who are at higher potential risk of injury on the slopes, so we would strongly recommend you think long and hard before sending your children out on their skis and boards (and even their toboggans) without a helmet.

The wearing of a helmet should not give the wearer a false sense of security, or be regarded as a panacea against fatal injury.  There is no evidence that helmets reduce the risk of death in the event of a high speed collision with another object.  Although, thankfully, these incidents are rare, it is important for you to exercise your parental responsibility and ensure your child skis/rides safely.  It’s not enough simply to put them in a helmet and send them hurtling off down the slopes.  You must educate them about the helmet’s limitations!  It does not make them invincible.  It won’t help them if they go careering out-of-control into a tree at high speed, or if they attempt a jump and fall on their neck.

Ultimately, it’s up to you as parents to make sure that you and your children always ski/ride under control.  Skiing and snow-boarding can be enjoyed safely and by people of all ages and levels as long as you are aware of other mountain users at all times, and obey the FIS (International Ski Federation) Rules for the Slopes.  Finally, remember the advice of Michael Berry, president ofAmerica’s National Ski Areas Association: “Wear a helmet, but ski as if you don’t”.

Buy one or rent one? 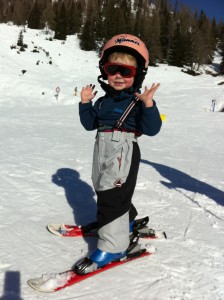 Look at me in my smart rental helmet!

“Why buy a helmet for a child” I hear you cry.  “Can’t we just hire one?” Ok, we appreciate that helmets are not cheap and that kids’ heads grow fast, so you may only get a handful of seasons of wear out of one.  Renting is cheap and easy: many ski schools offer them for free if you have booked a series of lessons; and some rental companies either offer free helmet hire for children, or as part of a package together with their skis/board and boots.

However, before you entrust your child’s head safety to a hire helmet, there are two important considerations:

1) If you choose to rent, check the helmet very carefully.  You wouldn’t put your child in a broken car seat or let them cycle in a broken cycle helmet.  We’re not saying that all hired helmets are broken.  Of course they’re not.  However, the fact is most children go skiing during February half-term.  The helmet they hire for that week has been rented out since the first week of December at the very best, if not from the season before.  Average wear and tear may not significantly reduce the effectiveness of a rental helmet, but just think how many times that helmet may have been dropped or bashed in that amount of time!  If a helmet is knocked repeatedly, this may reduce the effectiveness of the helmet.  It’s not an issue if the damage is obvious to the naked eye, but this may not always be the case, even following a major impact on the slope which was perhaps not reported to the rental shop.

2) The other lesser consideration is hygiene…. need we say more?

Getting the right helmet

Whether you decide to rent or buy, it is vital that you have a helmet which complies to the accepted standard for snow sports and that it is a good fit.  Remember: one size does not fit all.  Nor is it an item you buy for your child to grow into!

Helmet size is measured in centimetres.  To find the correct size, measure around the head (just above the eyebrow).  Align the front of the helmet above your eyebrows and tighten the chin strap.  It should be a snug fit – there should be no unwanted gaps between the helmet lining and your head.  If you shake your head, the helmet should not move around.  Also, ensure the back of the helmet is not pressing the back of your neck.  It’s worth trying on several different ones as each brand has a slightly different shape and various customisations to provide extra fit and comfort.  Before you buy/rent one, check it’s still comfortable once you’ve added your goggles/sunglasses.  Goggles work better with a helmet than sunglasses, which can sometimes be uncomfortable. 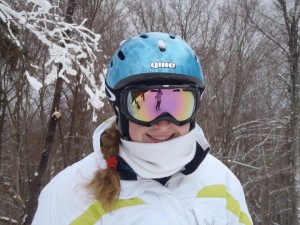 In most European resorts you will be able to rent a ski helmet for around €20-30 (or for free with a ski package).  You can purchase them for between €50-€100.  The main helmet standards to look for are the Central European Standard EN1077 or the American standards ASTM 2040 or Snell RS-98.  Make sure any helmet you purchase meets at least one of thses standards.  Bicycle helmets (or any other kind of helmet for that matter) are not suitable on the slopes.

More and more slope-users are buying helmets every year.  The parents at FamilySkiNews.com are recent converts to helmet-wearing (our kids have always worn them) and, believe us, they are surprisingly light, comfortable and reasonably ventilated.  Sales in virtually every ski country have increased year on year.  Whereas helmets were once deemed un-cool, the opposite is now increasingly true.  They are voluntarily worn in city skate parks and BMX courses; and also in resort, as half pipes, rail slides, stunts and jumps become ever more popular.

There’s a huge selection of styles on the market: most have a removable washable liner and earpads; some even contain adjustments to facilitate your child’s head growth; and the advent of built-in helmet cams, MP3 systems and other gizmos have also helped to give them more market appeal.  You can see the ones which have caught our eye this season in our Hats & Helmets section.