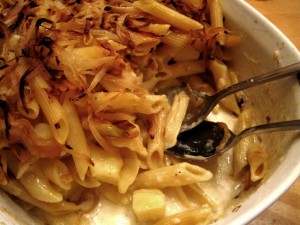 Quick and easy to prepare, hearty Älplermagronen (Herdsmen’s Macaroni) provides a rich, nourishing meal which certainly hits the spot with hungry children on a chilly day.

The dish takes its name from the ‘Älpler’, the Alpine herdsmen who lived off this hearty dish during harsh winters on the high Alps of Switzerland.  Over the centuries it has grown into a classic alpine dish and a veritable staple of mountain cuisine.

Some describe it as the Swiss equivalent of ‘macaroni cheese’, but that is doing it a great injustice! For starters, the pasta is cooked in milk to give an extra creamy texture. It contains small cubes of potato, and rich caramelized onions are spread atop the dish. Best of all, it is traditionally served with warm Apfelmus (apple sauce).

We were a bit skeptical about adding apple sauce at first, but its contrasting texture and zingy sharp flavour cuts surprisingly well through the cheesy richness of the dish. In fact, it’s this very combination which makes ‘Herdsmen’s Macaroni’ one of the most popular dishes right across the Alps.  In our opinion, if you’re not going to add/buy the apple sauce, you may as well look for a different recipe!

Over the years, it has become a classic alpine dish and a staple of Swiss cuisine. It is traditionally served with warm Apfelmus (apple sauce). (We were a bit skeptical about adding apple sauce at first, but its contrasting texture and zingy sharp flavour cuts surprisingly well through the richness of the dish.)

Method (allow ca 40 mins)
Boil the potato cubes in a large saucepan of salted water until cooked but firm (ca 15 minutes), then drain. In another pan, cook the macaroni in the milk and 1 litre of water until its al dente, and also drain. At the same time, fry the onions gently in butter over a medium to low heat until they are golden brown. Mix the potatoes and pasta together. Season the cream and pour over the potatoes and pasta. In an ovenproof casserole dish, layer the Älplermagronen (creamy potato/pasta mix) with the grated cheese and top it with the nutmeg and caramelized onions. Bake in the centre of a preheated oven at 375° F for 10-15 minutes until it’s piping hot and the cheese has melted.

Note: The Älplermagronen recipe can also be prepared a day ahead and heated for 30-45 minutes in 375° F oven (cover to prevent onions from burning) before serving.

Tweet us @FamilySkiNews or let us know what your family think of the recipe on our Facebook page, and be sure to come back again over the next few weeks as we add more mouth-watering dishes.