The 21 hairpins of Alpe d’Huez 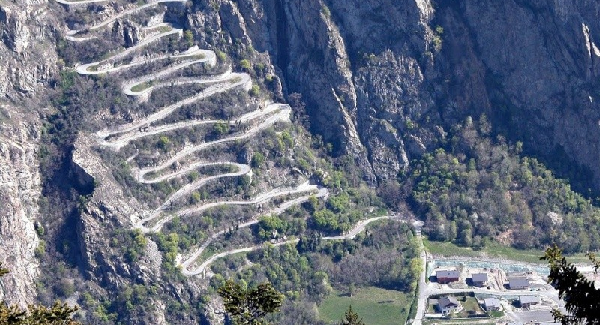 Some friends visited the French cycling Mecca of Alpe d’Huez earlier in the year to discover the appeal of its legendary 21 hairpin turns.  Phil and Oliver Nash, a father and son (aged 15) team, decided to attempt to cycle them uphill… and down again!  Here’s Oliver’s account: 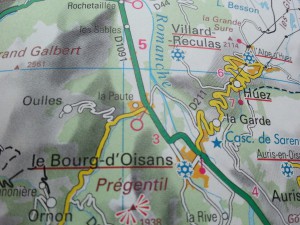 The iconic climb of Alpe d’Huez is one of the great ascents of the annual Tour de France cycle race. It is famous for its 21 hairpin corners that snake up the mountain, each labelled and bearing the name of Tour riders who have won this prestigious stage.

The route is a regular fixture of the Tour. However, it wasn’t used in the race until 1952, when it provided the location of the Tour’s first ever summit finish.

Since then, this epic climb has regularly shaped the outcome of the entire Tour de France: along the way, it has made tour champions and broken the hearts (and bodies!) of countless others. Indeed, it is so revered that, to celebrate the 100th anniversary of the Tour, race organisers decided to torture riders with a double ascent of Alpe d’Huez! 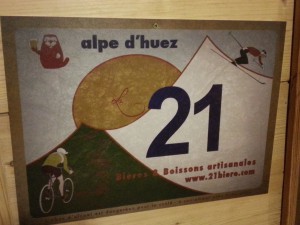 There’s even a beer named after the 21 bends

The 21 hairpins of Alpe d’Huez are also climbed every year by tens of thousands of amateur cyclists. It is considered one of the great “must-cycles” of Europe.   And so we found ourselves in resort earlier in the year, technically on a ski holiday but… hey, there wasn’t much snow, the weather was mild, and the 15.2kms (9.4 miles) of snaking tarmac bends were beckoning us.

On our drive down, we stopped off at some of the bends and deposited bottles of water, ready for the ascent (we wanted to carry as little weight uphill with us as possible). We parked the car at the bottom of the mountain in the small valley town of Bourg d’Oisans.  There just happened to be a bike hire shop here and, before we knew it, we were off! 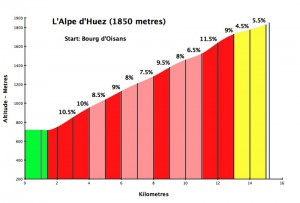 The average gradient is 8.1%

The route starts on the north-east edge of Bourg d’Oisans with a few hundred metres of flat before it climbs relentlessly uphill for 1850 metres all the way to the ski resort of Alpe d’Huez. Each of the 21 wiggly bends is numbered and its elevation recorded, together with the name of a previous Alpe d’Huez winner. They make interesting reading, from Giuseppe Guerini on bend one to Fausto Coppi and Lance Armstrong on bend 21, all the greats are listed. (There have been more winners than bends now, so when the top was reached they went back down again and started putting two names on each sign.)

The average gradient is 8.1%, with the steepest part at 11.5% and the fastest recorded ascent was 37 minutes and 35 seconds by Marco Pantani during the 1997 Tour de France. We weren’t after records though. We just wanted to get to the top and get the t-shirt… even if it took all day!

The climb itself was grueling, wiggling relentlessly up and up the road, legs burning, lungs gasping for air, as we slowly and methodically ascended, metre by metre, the entire uphill 15.2 kilometres, with the promise of a hair-raising descent to spur us on. We were glad it was January.  The Alpe faces southwards and there’s little shade; the heat must be unbearable in summer during the Tour de France. 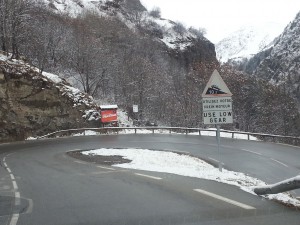 Easier down than up!

It made us realise what an extraordinary road the Alpe is: it measures just three kilometres from top to bottom as the crow flies, but zigzags within a straight plane all the way from Bourge d’Oisans to Alpe d’Huez. Stand at the bottom and you look straight up at the ski resort; stand at the top and Bourg is below you. This makes the Alpe is as close to a stadium as road racing gets, during the Tour de France, with over 300,000 fans along the route.

There were no fans cheering us on though. Our family were all skiing and enjoying themselves on the sun terrace at La Folie Douce.  Onward and upward… the hairpins became almost mesmorising as we counted them down towards the summit, and tried hard not to glimpse our watches for a time-check.

Eventually the straights become longer, the gradient eased and the buildings of Alpe d‘Huez came into view. The official end of the Tour stage is on the Avenue de Rif Nel (outside Hotel Chaix). We’d arrived!

So, how long did it take us?… the benchmark time for keen amateurs is one hour. Many take double that.  We took 1 hour 40 minutes (Phil) and 1 hour 20 minutes (Oliver) – son beating father by 20 minutes.

Afterwards we sat, father and son, in a simple pizzeria, silent, chomping through our pizzas, proud that we’d just completed the most famous mountain climb in cycling, satisfied with our times but also aware just how far from the professionals we were in our achievement.

That night, as we went to bed, we thought of the words of French journalist for L’Equipe, Gérard Ejnès, who once exclaimed: “[Alpe d’Huez is] The Alpe! It’s like all the Alps encapsulated in one mountain”. It certainly felt as though we’d cycled them all!

If you ever have a go, here are some tips:
Warm up really well before you start!
Pace yourself.  Don’t let your excitement carry you away at the start.  There’s a long climb ahead!
The first two kilometres are especially brutal but then it becomes slightly gentler. Sometimes, during Tour de France season, there’s a pro-photographer just before the finish… so smile and make it look like it’s all been easy!

Summer skiing in the Austrian Tirol