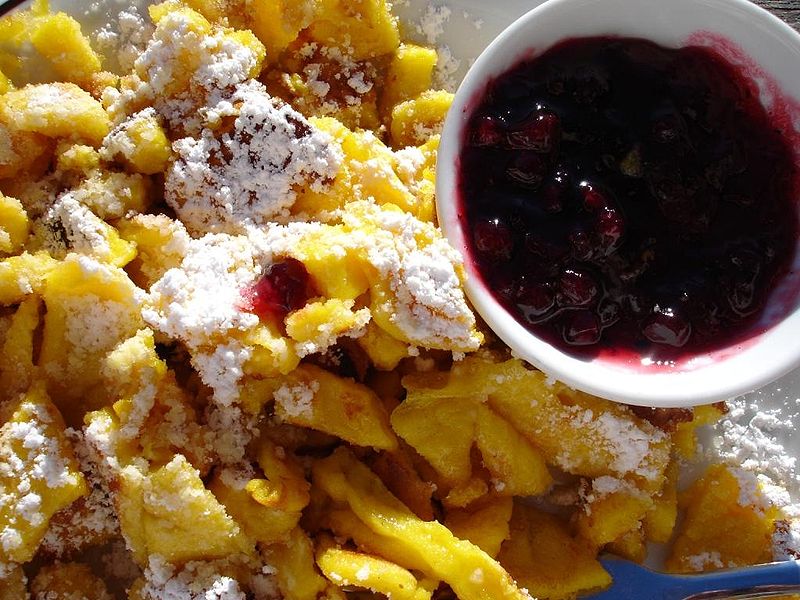 Kaiserschmarrn is a traditional Austrian and Bavarian pancake dish that can be eaten as a dessert or a meal.

Its name means the “Emperor’s mess”, from Kaiser (‘emperor’) and Schmarrn is slang for ‘mess’, ‘mish-mash’, ‘rubbish’ or ‘nonsense’.

There are many stories about how the dish may have got its name, but these are perhaps the most popular:

Emperor Franz Joseph I once awoke in the night and felt peckish.  The servants were all alseep so he went to the kitchens to make some food.  He had no idea how to cook and this dish is what he concocted – the Emperor’s mess!

More likely perhaps is this story, claiming that Franz Joseph’s wife, the fashion-conscious Elisabeth of Bavaria, was always watching her weight and imploring the chefs to make only light desserts, much to the annoyance of her husband.  One day she was served up this pancake dish and refused to eat it, claiming it was too rich.   The exasperated Emperor is said to have derisorily remarked “what ‘Schmarrn’ has the chef cooked up today”, but then – such was his delight at tasting the pudding – he proceeded to eat all of his and his wife’s portions!

One thing’s for sure, it was first served during his reign and, even though Emperors stopped ruling the region nearly a century ago (in 1918), Kaiserschmarrn has remained one of the most popular desserts in Austria and Bavaria.

It’s essentially a soft, thick, sweetened pancake, but once it’s cooked, you cut it into lots of little bite-sized pieces… so you don’t need to worry about your pancake remaining perfectly round!  Delicious and filling, it’s a meal in itself, or hearty pudding.  We find it rounds off a lunch-break on the slopes perfectly, after a warming bowl of soup.

Method
Beat the egg whites and sugar in a bowl until stiff.
In another bowl, combine the milk, flour, egg yolks, lemon juice, rum, vanilla extract and salt and stir until the batter is smooth.
Drain the rum-soaking raisins and add them to the batter.
Carefully fold in the egg white mix.
Melt the butter in a large non-stick frying pan over a medium heat.  Pour in the pancake batter – it should be about 1cm thick.  Cook on the stove until golden in colour.
Flip – don’t worry if the pancakes break when you flip them over! – and cook the other side until set.
Take two forks and tear the pancake into small irregularly-shaped pieces.  Continue cooking until golden brown (approx 2 mins)
Sprinkle with icing sugar and serve immediately with Zwetschkenröster (stewed plums) or Apfelmus (‘apple sauce’).

To make the Zwetschkenröster plum sauce