Swiss hat trick on the Lauberhorn

The mighty Lauberhorn is with doubt the most prestigious downhill race of the ski season and 2020’s race, on 18 January, was no exception.

The Lauberhorn is considered the most physically demanding of all the World Cup downhill races – it’s 4.48km long (most World Cup downhill courses are around 3.2km) so each race is 30-45 seconds longer than the average downhill, with some tough terrain including the Hundschopf jump and the Haneggschuss, the fastest stretch of course on the downhill circuit. The 2020 course, however, was shortened to 2.95km, starting lower down the mountain after a night of heavy snow – the first snowfall in several weeks for Wengen. 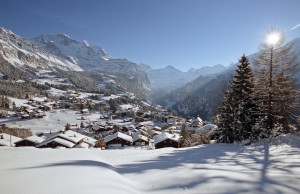 Once again, this season’s main rivals Italian Dominik Paris and Swiss Beat Feuz battled it out, with Feuz taking the crown on home snow, skiing a flawless second run in 1 minute 42.53 seconds.

Related features:
What’s in a piste?…what makes the Lauberhorn so special?
Lauberhorn race cancelled
Wengen puts families at its heart