What’s in a piste?… What makes the Lauberhorn so special?

This weekend dozens of racers will push off from the tiny wooden hut at the top of the Lauberhorn – to compete in the oldest, longest, fastest, and arguably the most beautiful downhill racecourse on the World Cup circuit.   But what makes it so special, and so exciting?  Here are 10 things everyone should know about the Lauberhorn!…

1 The Lauberhorn (2472m/8110ft) is a mountain in the Bernese Alps in Switzerland, between the resorts of Wengen and Grindelwald.

2 The Lauberhornrennen (‘Lauberhorn alpine ski race’) is a 4.48km-long descent (most World Cup downhill courses are around 3.2km) and one of the oldest continuously-staged ski races in the world.  Unlike most other major ski races, the Lauberhorn in neutral Switzerland was staged during the Second World War: all the events were won by Swiss racers.

3 The race was initiated in 1930 by Ernst Gertsch to prove the Swiss could beat the Brits.  Nobody ever imagined it would become a national spectacle.  Ernst won the slalom; his Swiss friend Christian Rubi won the downhill; while Brit Bill Bracken won the combined – it was Britain’s first and last Lauberhorn trophy!

4 Now over a million views watch the race live on Swiss TV, making it the largest audience for a sports event in Switzerland.

5 It’s considered the most physically demanding of the downhill races on the circuit, with its signature jump, the Hundschopf (a 40m jump over a rocky nose) in the shadow of the mighty Eiger, Mönch and Jungfrau peaks; the Kernen-S (passing over a bridge at around 80km/h) and the Haneggschuss – the fastest stretch of snow on the World Cup Circuit. 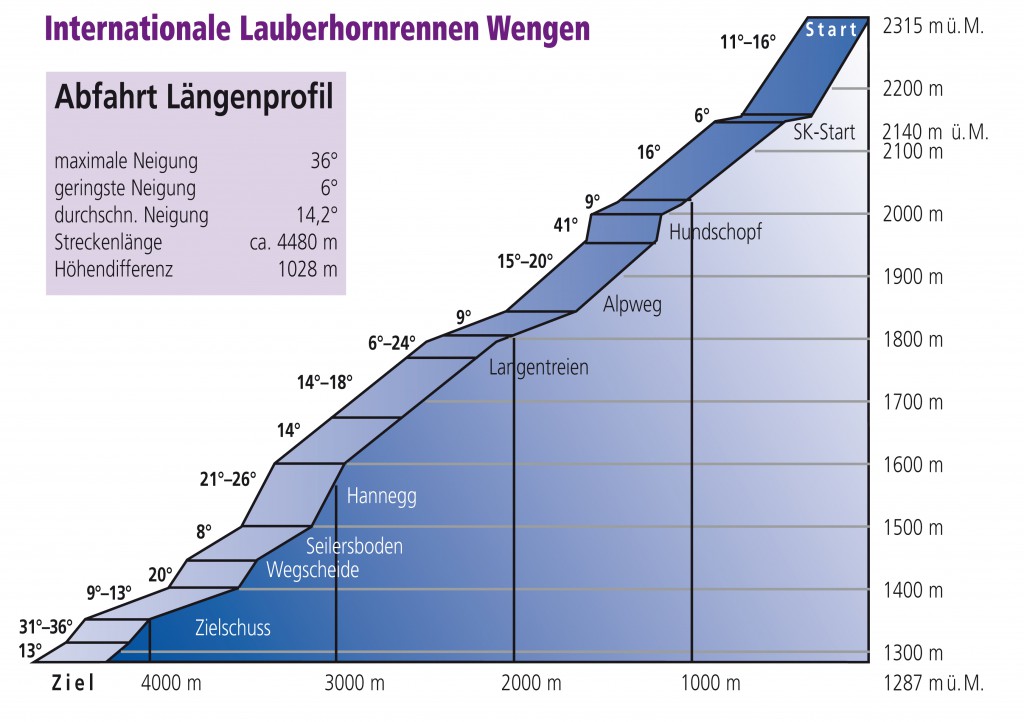 6 The Österreicherloch section of the course got its name in 1954 when almost every participating Austrian skier fell there – it means the ‘Austrian hole’.

7 The average race time is two and a half minutes – around 30-45 seconds longer than a standard downhill race, yet nearly half the time it took to ski the same course in the 1930s.

8 The Lauberhorn produces the speediest skiing on the World Cup circuit.   Top speeds at the Haneggschuss approach 160km/h.  The fastest speed ever measured here was achieved in this section in 2013 by Johan Clarey of France at 161.9km/h (100.6pmh)!

9 Safety is paramount (there was a fatality in a training race in 1991 when Austrian Gernot Reinstadler slammed into the safety net and died shortly afterwards from his injuries): 16km (10 miles) of security nets are erected at the edge of the downhill run, surrounded by further 1,000m (3,300ft) of high security nets and 800m (2,600 ft) of rejection canvas.

10 The Lauberhorn is one of the world’s toughest, most exciting and most unpredictable races.  To win, you not only need perfect technique and shedloads of stamina, but you also need loads of courage and a willingness to take risks.  With CHF100,000 prize money at stake, and 27 victories to date for the Swiss, 28 for the Austrians, it’s all to play for this weekend… it could be anybody’s race!

You can watch TV highlights of all the weekend’s ski racing at Wengen, including the celebrated Lauberhorn men’s downhill here: