A smugglers adventure in Ischgl

Our editor, Teresa Fisher, recalls the time she would carry her passport in her ski rucksack, in case it was required at border crossings. This season, she’s on a ski safari investigating the former smugglers’ routes between Austria and Switzerland – now popular family ski circuits, and suitable for all levels of skier or boarder from elementary upwards.

How cool it is to cross an international border when skiing – to ski from one culture, cuisine language to another.

There are currently several border-straddling ski areas in the Alps – Zermatt-Cervinia (Switzerland/Italy); The Milky Way (France/Italy) and Les Portes du Soleil (France/Switzerland); and the lesser-known Kanin-Bovec-Sella Nevea (Italy/Slovenia).  But none compares with the Austrian resort of Ischgl.

In Ischgl, not only can you ski between Austria and Switzerland, but you can follow their infamous Smugglers’ Routes. 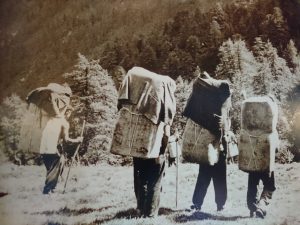 It was once big business for locals of the Paznaun region in Austria to smuggle goods across the border to Switzerland, even as recently as the 1950s. Coffee, tobacco, furs and American nylon stockings were all part of the contraband carried between Ischgl and the Swiss village of Samnaun.

It would take the locals up to 10 hours to cross, on foot, by mule and on skis – they didn’t have the luxury of ski lifts, of course – and they would be carrying up to 10kg of booty on their backs. At the border, the customs officers would turn a blind eye as they passed. They would even sometimes buy the goods themselves.

Ischgl has now ingeniously recreated the smugglers’ original routes in a series of family-friendly ski trails called the Smugglers’ Circuits. 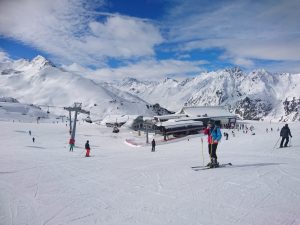 Scenic routes on the Smuggler Circuits

Here there are three impressive routes, each offering a varying level of difficulty and incredible views of Palinkopf (2864m), Piz Val Gronda (2812m) and the Muller (2519m) peaks en route:

The Bronze Smugglers’ Circuit uses only blue runs (so it’s suitable for good elementary as well as intermediate skiers upwards) and it’s the shortest route of the three. Nonetheless, it’s not for the faint-hearted skier nor for tired toddler limbs, as you still need to cover 40km of pistes and a vertical descent of 8,282m. It’s a full daytrip (it takes 4 hours of non-stop skiing) so forget that holiday lie in… it’s really worth getting up early to make a head start on the resort’s perfectly groomed pistes before the slopes become crowded. Pack snacks, water, sunscreen, spare gloves and layers for the kids, and off you go on the ultimate smuggling adventure of your holiday. You’ll be well rewarded by sensational mountain vistas, plenty of piste-side huts for refreshments, and a whopping sense of achievement as you cross the finish line with all the family in tow. You can find further details of check-points (there are 11) and technical data (distances, altitudes, etc) HERE. 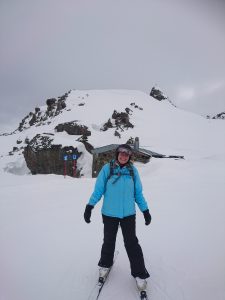 If your family are proficient intermediates, then the Smuggler’s Silver Circuit is the one for you. It’s a similar length (just over 41km) and with nearly 9,500m difference in altitude, but you should be able to complete it in around 3.5 hours, or better still, a full day with a restorative mountain-top lunch en route. This is the one I did with my ski guide, Martin – an inspiring and long-suffering ski-instructor-cum-local-dairy-farmer.  (I found him tending his cattle in their stable beside my hotel, the 4* ultra-family-friendly Hotel Seiblishof, the following day, but that’s another story.)

The silver circuit includes a number of black and red runs – so it’s not suitable for elementary skiers or beginners. You can find further details of check points, altitudes and technical data HERE.

The Smuggler’s Gold Circuit is only for experienced and capable skiers and boarders – it’s one of the longest and most challenging ski circuits in the world, with some impressive steep descents and black runs and steep descents (Total distances: 59km, 12,926 vertical metres). It takes a good 4 hours to complete without stops, so start early if you intend to stop for hot chocolates or lunch en route. You can find further details of checkpoints, altitudes and technical data HERE. 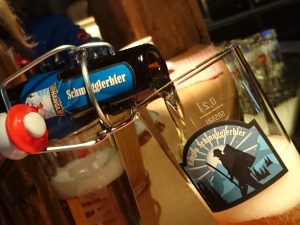 What will you smuggle?
Although passports are no longer needed to cross the border, there is… bizarrely, at the top of the mountain, in the middle of nowhere… a duty free shop. The adjoining Swiss resort of Samnaun is a tax-free enclave, so be sure to ski with an empty rucksack as it’s the perfect opportunity to stock up on bargain-price perfume, make-up, jewellery, booze, Swiss watches… Yes, really. If you want to treat yourself to a new Rolex on a ski day-out, this is the place for you. It’s half-way down piste number 80.

The duty free shop also happens to adjoin a snug, eccentric slopeside restaurant, the SchmugglerAlm (Smugglers’ Inn”), which serves the local beer, called – yes, you’ve guessed it – Schmuggler Bier. Just saying the beer’s name makes you sound a bit sloshed.  I highly recommend it to wash down the hearty pizzas, made before your eyes by one of those flamboyant chefs, who spins the dough above his head before frisbeeing it (with toppings, of course) into the wood oven.  (However we don’t recommend skiing following the consumption of alcohol). 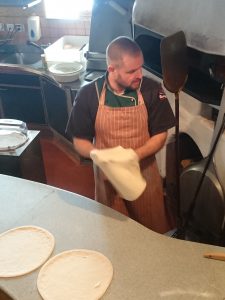 The restaurant prides itself on its traditional cuisine, with such old-fashioned dishes as smugglers’ soup (a broth with bacon and cheese dumplings); hunter’s salad (with deer fillet and goat’s cheese); Samnaun cheese fondue; or a smugglers’ Wurza (sausage, served with grated horseradish). Save room for dessert – apple strudel swimming in vanilla sauce. You’re sure to feel fortified for the second half of your circuit after a meal here.

Where to start/end?
Each trail starts and ends at the lower terminus of the Fimbabahn in Ischgl or the Twinliner (lower terminus) in Samnaun. Be sure to pick up a special “Schmuggler Runde” (Smugglers’ Routes) pistemap in resort before you set off.

The smugglers’ route you choose will depend on your family group. But whichever one you do, one thing’s for sure – it’s a real adventure offering unforgettable family holiday memories and a great sense of achievement.

Further information
You can find more information on Ischgl by clicking HERE, and on the Smuggler Circuits HERE.  The resort App downloads for iOS and Android can be found HERE.

To enter the raffle, all checkpoints in one circuit must be passed in the correct order on the same day. These checkpoints (usually at chairlifts or cable cars) are marked in the App, and your phone should simply ping, vibrate and send you a notification to let you know you’ve passed each point successfully. Speed is not a factor but you do need to upload your results by 5pm to qualify for the prize-draw. Those who successfully complete their chosen circuit can enter prize draws every day, weekly and for each season. Prizes range from buffs and smuggler’s rucksacks to half-board hotel short stays in resort, lift passes and even highly coveted passes for mountain concerts. Ischgl’s five month long ski season is always opened and closed with a massive open-air pop concert called Top Of The Mountain. (Click HERE to see our feature on a previous end of season party. This year’s season-close party will be on 30 April with Lenny Kravitz. For tickets, click HERE.) 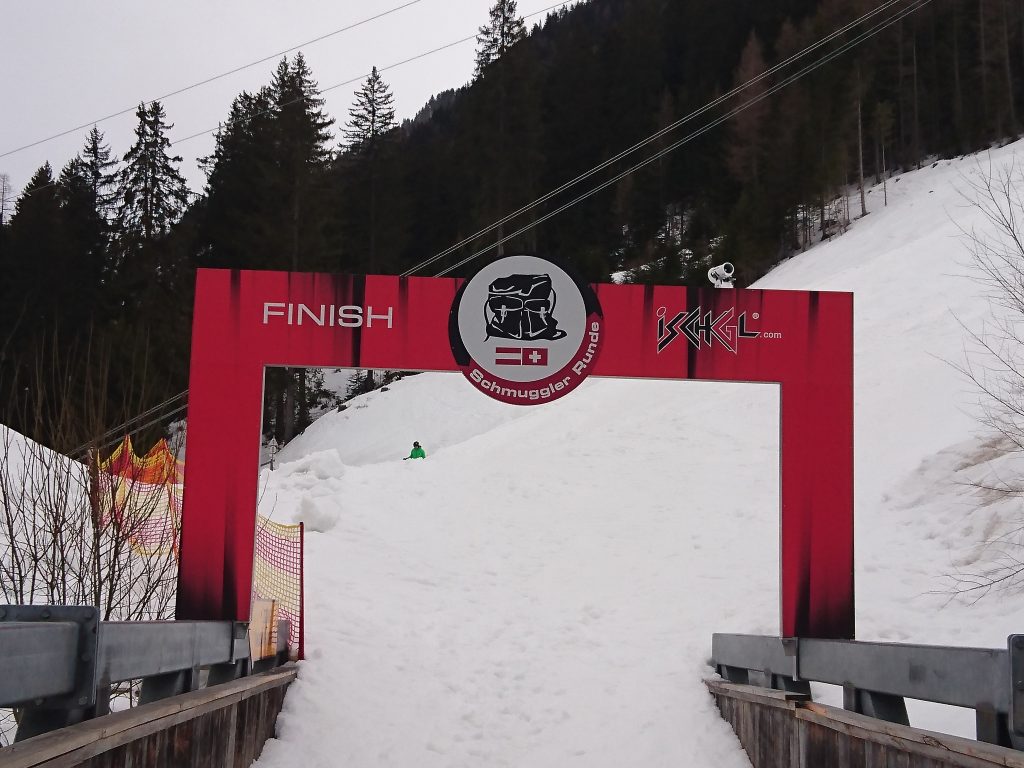