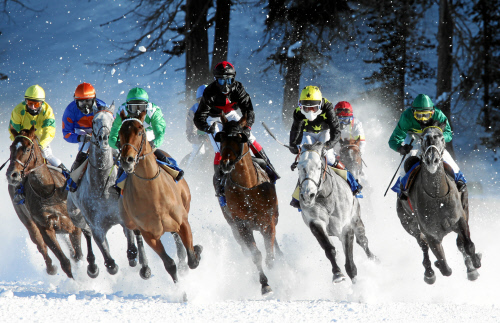 The town of St Moritz needs little introduction: a glamorous winter playground with more 4- and 5-star hotel rooms than any other resort in Europe. As the world’s oldest ski resort and cradle of winter sports, it seems appropriate that St Moritz hosts a number of unusual sporting events, including snow polo, snow cricket, snow golf and the only Skikjöring competitions in the world.

White Turf horse racing has taken place here for over a century, on Europe’s highest race course – on the frozen lake, surrounded by the snow-clad mountains of the Upper Engadine. It is Switzerland’s most lucrative race, with total prize money of around 445,000 Swiss Francs. 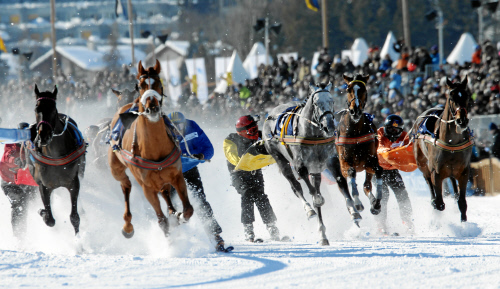 It’s hard to beat the spectacle of hooves thundering through clouds of snow spray. Every year, the exciting gallop and trotting races keep more than 35,000 spectators spellbound, but the real crowd-puller is the Skikjöring competition, when daredevil skiers are pulled at speeds of up to 50km/hour by unmounted thoroughbreds over the icy frozen lake for 2,7000m.

It is a unique and thrilling spectacle: the courage, stamina, strength and skiing skills of the participants over the three race Sundays determine who will be crowned this year’s acclaimed ‘King of the Engadine’.