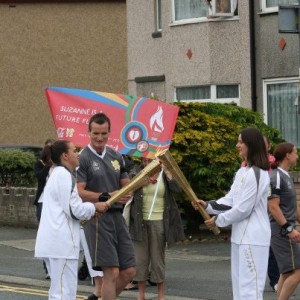 Britain’s number one snowboarder Zoe Gillings is the latest in a line of winter sports athletes to carry the Olympic torch.

Twenty-six-year-old Zoe has participated in two Olympic Games – in 2006 in the boarder-cross event and also at the Vancouver Games finishing eighth.  She is a definite medal hopeful for the next Winter Olympics in Sochi in 2014.

Today she proudly carried the torch through Castletown on the Isle of Man, where she was born.   In a BBC interview, she said: “I am very excited to be involved with the Torch Relay and thrilled to be nominated by the Manx people.”

“The Olympics is the pinnacle in sport … the way it brings people together from all over the world to celebrate sport is amazing.”

Other snowsports athletes taking part in the 8,000 mile, 70-day trail around the UK prior to the Opening Ceremony on 27 July include Ed Drake, Katie Summerhayes and Britain’s top female skier, Chemmy Alcott.

For more information on when and where they will be carrying the torch, see this earlier FamilySkiNews report.

Skiing starts in the southern hemisphere