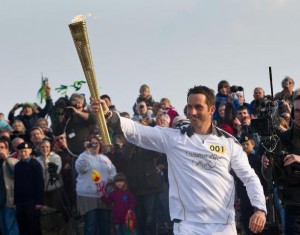 Ainslie was the first of 139 torchbearers today, at the start of a 70-day, 8,000-mile relay leading to the Opening Ceremony of the Games on 27 July.  Comparing his leg to winning one of his Olympic golds, he remarked: “It was one of those moments where I was in a bit of shock really.  At least I didn’t trip over”.

On his Facebook page this evening, he wrote: “What a day!!!!  Being the first Olympic Torch bearer was a real honour and it was fantastic to see so many people out in Lands End and Falmouth, you did the country proud.  Now for some sleep….”

A total of 8,000 torchbearers will take part in the torch relay, including a number of British snowsports athletes including Chemmy Alcott, Ed Drake, Katie Summerhayes and Ellie Koyander.  You can read more about them and their dates and locations for the relay in our earlier news report here.

Now, finally, after months of hype and press coverage, the Olympic countdown really begins. The start of this long-awaited relay today has made the whole event seem much more of a reality.

As former Olympian Steven Redgrave reported in the Telegraph today: “For the spectators it’s the moment when they can really start to appreciate the enormity and significance of this crazy, chaotic, wonderful festival of sport hurtling towards us.”