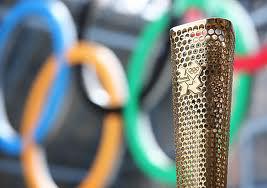 The Olympic flame arrived this evening ready to start a 70-day journey around the country.  It was ignited in Greece on 10th May and presented to Princess Ann, President of the British Olympic Association in the Panathenaic Stadium in Athens. 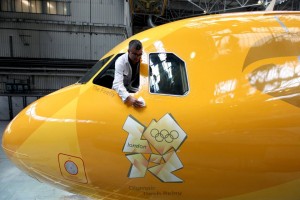 All aboard The Firefly

The flame was strapped into seats 1A and 1B, in what would normally be business class, on its journey from Greece to the UK.  The pilot, Captain David Thomas, is said to have remarked “It’s slightly unusual to be playing with fire on an aeroplane.”

Classed as dangerous goods, the Olympic flame had to adhere to strict regulations: it was in four lanterns, in specially-made metal cradles which were secured to the seat by a seatbelt and a Velcro strap.  A fire warden was seated in seat 1C, monitoring the flame for the duration of its 1,500-mile flight.  It arrived at Royal Naval Air Station Culdrose in Cornwall this evening. 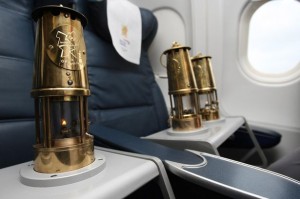 Tomorrow morning marks the start of the London 2012 torch relay from Land’s End, led by triple Olympic sailing champion Ben Ainslie.  In 70 days the torch will travel approximately 8,000 miles to 1,018 destinations around the UK and Ireland, climaxing in the Olympic Park in East London on 27 July.

In the words of IOC President, Jacques Rogge: “As the Olympic torch travels the width and breadth of the United Kingdom on its way to the Olympic Stadium in London, its powerful symbolism and the inspiring stories of many of the torchbearers will touch hearts and fire imaginations around the world.”

Among its 8,000 torchbearers, taken from all walks of life, there are a number of British snowsports athletes including Chemmy Alcott, Ed Drake, Katie Summerhayes and Ellie Koyander. 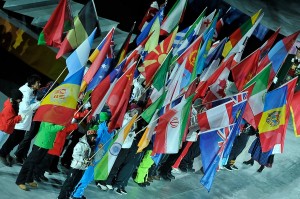 On 25 June, 16-year old Katie Summerhayes, Britain’s Ski Freestyle Champion, will take the torch through Sheffield.  She told reporters “Everyone at school is so hyped about the Olympics.  Everywhere I turn I see something about Team GB and it’s an amazing feeling just to be a part of it.”  Katie has already had a similar honour bestowed upon her – she was the flag-bearer for Team GB at the Winter Youth Olympic Games in Innsbruck, last January, as we reported from the Austrian city here.

On 30 June, women’s mogul skier, 20-year-old Ellie Koyander will carry the torch through Burton upon Trent.   She was the youngest member of Team GB at the Vancouver Winter Olympics in 2010, coming 24th in the discipline of Freestyle Moguls Skiing.

On 18 July, another Vancouver Olympic snowsports athlete and Britain’s number one male ski racer, Ed Drake, will carry the torch through Hastings.

On 24 July, just three days before the Olympic Opening Ceremony, Chemmy Alcott -Britain’s top female ski racer – will be carrying it through the London borough of Ealing.  “It is an amazing honour and privilege to be selected to carry the Olympic Torch and to be part of the most important and prestigious sporting event in the world…. I’m really excited to be a part of my home games” remarked Chemmy, who hopes to represent Britain at the next Winter Olympic Games in Sochi in 2014.

To find out when the torch comes near you and who’s carrying it, and also to search maps, check street routes and follow the BBC’s daily live online coverage over the next 70 days leading to the London 2012 Olympics Opening Ceremony on 27 July, check out the live torch relay webpage here.