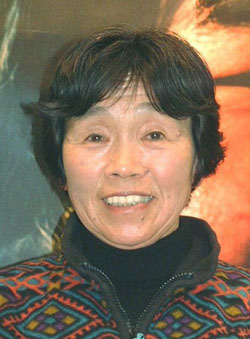 A Japanese woman stunned the mountaineering world this morning by successfully climbing Mount Everest at the age of 73, setting a new world record for the oldest woman ever to reach the summit.

Tamae Watanabe, a retired office worker, scaled the 8,848-metre peak of the world’s tallest mountain at 7am Nepali time, accompanied by Japanese mountaineer and photographer Noriyuki Muraguchi and three other team members.

They made their ascent from the north ridge route from Tibet.  Due to bad weather, they had set off from Katmandu for the mountain twice last month, but had been forced to reschedule their summit plans each time due to bad weather.  Today it was third time lucky!

The most remarkable and ironic aspect of Watanabe’s achievement is that she beat her own age record today for conquering the mountain.  Back in 2002, on May 16, she summited Everest from the southeast ridge route in Nepal, at the age of 63 – a record which stood for a decade until today.

The oldest person ever to climb Everest is a Nepali national, Min Bahadur Sherchan, aged 76, in 2008.  Just last year, an 82-year-old man died on the mountain while trying to beat his record.

Who knows… perhaps Watanabe will try again a few years from now?  Or perhaps today’s formidable new record will stay unchallenged for decades.