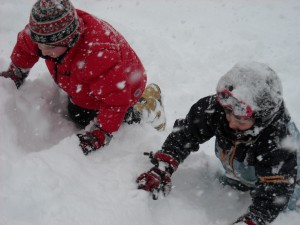 Winter has briefly returned to the Alps.  Temperatures have plummeted after last week’s unseasonably hot weather, and it’s snowing again – quite heavily in some resorts – much to the delight of the Alpine resorts with the Easter holidays rapidly approaching.

Here at FamilySkiNews.com we can’t quite believe it.  Last week, with temperatures soaring into the 20s, kir royales and ice-cool coca colas replaced our usual vin chauds and hot chocolates on the slopes of Paradiski, as we peeled off our thermal layers and donned our T-shirts and factor 50 creams to enjoy the hot, sunny weather on the ski terraces even at altitude.  But the snow towards the end of the day was becoming decidedly slushy and heavy-going on the lower slopes. 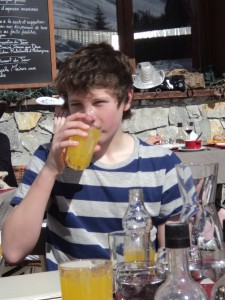 Now temperatures have dropped significantly and there’s been decent snowfall across much of the Alps.  Most resorts have had a healthy dump of around 20-30cm, although some destinations (such as Chamonix) are reporting up to 50cm.   This should be enough to top up all the runs and provide excellent skiing conditions for the rest of the week – but take care and remember there could be crusty snow underneath.

Sadly, it does not signal a return to the idyllic snow conditions of January, and spring-like temperatures (though not as warm as last week) are anticipated to return later this week.

Meanwhile, the snow in the Alps is but a mere dusting compared with the massive dump of white stuff hitting California and parts of the American Rockies over the weekend.  We’re talking serious powder… with Utah’s Snowbird claiming 83cm; Heavenly in California reporting 147cm of fresh snow; and nearby Kirkwood boasting a staggering 2.8 metres of fresh new snow in just one weekend.  Here’s the latest powder footage filmed today…