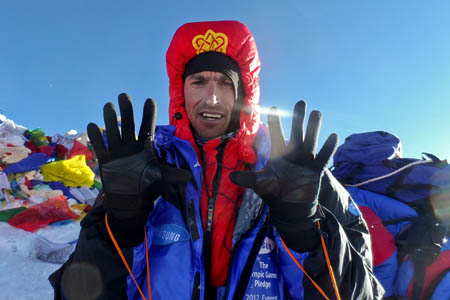 Kenton Cool has summited Everest for the tenth time – more times than any other British mountaineer.

This climb was particularly significant, as he took with him an Olympic Gold Medal that was presented to Arthur Wakefield for his part in the unsuccessful 1922 summit attempt.

In 1922 a team of British climbers had tried to become the first to climb Mt Everest.

Two years later, at the first ever Winter Olympic Games, staged in the French resort of Chamonix, the men were awarded a gold medal for their contribution to alpinism.  At the time, they made a pledge to Baron Pierre de Coubertin, the founder of the modern Olympic Games, that the medal would one day be taken to the summit.

Yesterday – 25 May 2012 – Kenton Cool honoured that pledge, taken 88 years ago, as he set foot atop the world for his tenth time, with Arthur Wakefield’s medal.

He reports: “to stand on the summit for the 10th time is simply amazing.  To have with me an Olympic gold medal awarded to the 1922 team is humbling.  This promise needed keeping, and after 90 years the pledge has been honoured for Britain.”

Here’s a video of Kenton (and the medal) reaching the summit:

What a cool achievement…