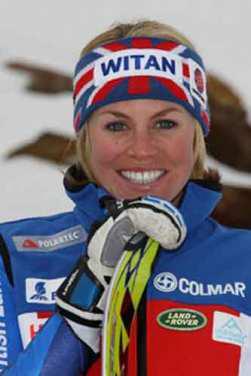 Great news!  Chemmy is back on skis…

29-year-old Chemmy Alcott is Britain’s number one female alpine ski racer, competing on the World Cup circuit in all five ski disciplines – downhill, super G, giant slalom, slalom and combined. Her absence on last year’s circuit however was due to a serious compound leg fracture in December 2010 whilst training in Canada.

She posted the following on her Facebook page yesterday: “Skied today for the first time since 2nd Dec 2011. As expected there was a bit of pain and discomfort with the metal work, but the great news is the faster i went the less i felt my leg wohoo! Not that i went fast as I was under strict instructions on post injury ski rehab!!”

“Can’t wait until tomorrow, and the next day and the day after and all the other snowy days that i will have in my life!!”

Part of her earlier rehabilitation was taking part in ITV’s popular television programme Dancing on Ice earlier this year.  At the time, she blogged: “I am a rehabbing athlete who has NOT quit her first love, skiing. After my horrendous crash, ice skating is enabling me to find the link between my head and metal right leg. It is helping not hindering my rehab.”

You can read more about Chemmy and her ‘Dancing on Ice’ experience in our earlier report here.

Chemmy started skiing when she was just 18 months old, and first competed when she was eight.  “My elder brothers were skiing gods so I just followed them!” she is reported to have said.  “My competitive urge was clear to be seen as I tried to ski and keep up with my older brothers. In the beginning of my racing, girls and boys competed together; no boy was going to beat me!!”

Up until her recent leg injury, she was the only British woman currently competing in World Cup events, and the first British woman to qualify for and race in a World Cup final.

Setting foot onto the slopes this weekend is clearly a significant step forward for Chemmy.   She is now planning to start intensive training, and is setting her sights on her fourth Winter Olympics, at Sochi in Russia in 2014.

In the meantime, she will be taking part in the London 2012 Olympic torch relay, carrying it through the London borough of Ealing on 24 July – just three days before the Opening Ceremony.  Chemmy is just one of a number of British snowsports athletes taking part in the relay, as FamilySkiNews reported earlier here.

To find out when the torch is coming near you and who’s carrying it, and also to search maps, check street routes and follow the BBC’s daily live online coverage over the next 70 days leading to the London 2012 Olympics Opening Ceremony on 27 July, check out the live torch relay webpage here.