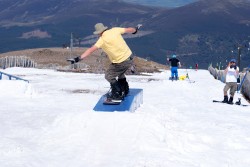 Last day of the season on CairnGorm Mountain

The 2011/2012 ski season in Scotland finally ended this weekend.  What an odd season it’s been, with skiing so late into May after what was, quite frankly, otherwise a pretty forgettable season.

In fact, it ended a while ago, but then everything reopened again after all the snowfall in May.

Now the sun has come out and the snow has finally melted.  After a day of very limited T-shirt skiing on patchy snow on Saturday, the resort closed its lifts and issued a statement on Sunday: “That’s it folks for another snowsports season. Thanks for everyone who made the effort to join us for the sunshine shred yesterday, and indeed throughout our topsy turvy season. See ya’ll soon!”

The winterhighland.info website simply stated: “We didn’t quite make it to June, which would have been almost fitting for such a bizarre season, but I’m not sure too many will mind if this past week has been a taste of the Summer to come in Highland Scotland!”