Tirol – the Alps in London

With the end of the Games looming, the big question is which of London 2012’s national hospitality houses will win the gold medal for partying?

John, 34, a lawyer from Bermondsey, says: “I have been to other houses, like the Danish, Dutch, Russian and French, but the Austrians are having the best party, food and beer. That’s why I have been back for several times and don’t want the Olympic party to end!”

It’s true.  The Austrians have been partying hard!  Over 1200 sausages and 1500 schnitzels have been consumed in Austria House (located at Trinity House by Tower Bridge), and during the busy Ischgl party weekend over 7000 pints of beer were drunk in celebration!

In fact, over the last two weeks, Austria House Tirol, located at Trinity House, has welcomed around 40,000 visitors into their Tirolean Alpine Garden from all over the world. Entry is free, and British, German, Swiss, Irish, Australian, Danish, Croatian, Czech, South African, American, Canadian, Dutch, Italian, Belgian, French, Chinese visitors have all passed through, contributing to making a truly vibrant and international party atmosphere.

FamilySkiNews.com has been covering the action from the Alps in London, and you can read more about the various events, including a crazy Snow-Day with Eddie the Eagle, by clicking here. 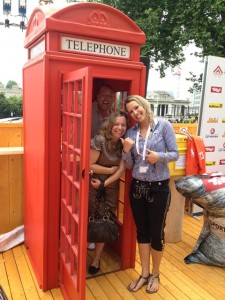 The yodelling competition taking place in the iconic red telephone box (as we reported here) continues to be a real hit, as is the chairlift photo opportunity as visitors get dressed in ski gear to pose with their friends.

This weekend the Kitzbühler-Alps take centre stage to host a summer alpine weekend, cheering on Austrian medal hopeful Lisi Osl in the women’s mountain bike event on Saturday 11th August, to the accompaniment of traditional Tirolean music, cuisine and entertainment. Originally from the Kitzbühler-Alps region, Lisi Osl has had the perfect training ground in an area home to over 800 km of mountain bike and cycling trails and the largest e-biking area in the Alps. After the event on Saturday, Lisi Osl will be at the Austria House as a special guest.  On Sunday, the well-respected mountaineer Peter Habeler (the first man to ascend Everest without oxygen with partner Reinhold Messner in 1978) will be there from 11am.

There will also be various chances to win a holiday to the Kitzbühler-Alps: visitors are invited to bring along a summer mountain photograph to pin on the photo wall and the best will win a holiday (don’t forget to put your name and contact number on the back of your entry). To find out more about this weekend’s events at Austria House, click here.