It featured Britain’s Jamie Nicholls and Billy Morgan who finished a brilliant sixth and 10th respectively.

Thankfully, it was a day without incident, despite questions about the safety of the elements on the slope.  As we reported in an earlier story (Slopestyle debuts as an Olympic sport), some athletes had already pulled out due to safety concerns and injury in training. 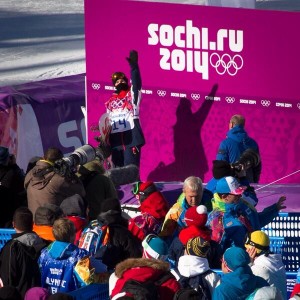 Jamie summed up the competition perfectly on Facebook afterwards: ”One of the best days of my life! Thanks so much to everyone for the support. Can’t believe that I was part of the most craziest snowboard final to ever go down and to finish sixth and put my run down was something I only dreamt of doing before I came here! Thank you again all so much.”

Billy Morgan also conveyed the excitement of a top ten finish, tweeting: “Riding today was crazy. Speaking to people about the finals saying that it was the best sporting show ever. Absolutely pumped.

Of gold medallist, American shredder Sage Kotsenburg, he added: “Pumped for @sagekotsenburg the gold couldn’t have gone to a better human being!”

Meantime, amongst numerous remarks on Sage’s twitter page, were the following: “WOW!! I just won the Olympics!!”…. [on the garish US sweaters] “Christmas sweater parties next year… thank you Olympics”
plus… some (lucky?) Olympic onion rings!