PyeongChang has been an epic Winter Olympics, with more than 2000 athletes from 92 countries competing in over 100 events, including first-time winter games teams from Ecuador, Eritrea, Kosovo, Malaysia, Nigeria and Singapore. As the Olympic torch is passed from South Korea to Beijing, here are some of our favourite moments of the Games. 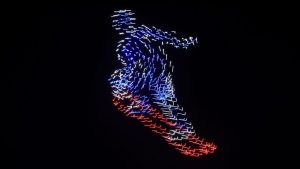 1) North and South Korea coming together
At the opening ceremony, North and South Korea marched out together, waving white and blue unity flags depicting a united peninsula, after the heads of both their states had shared an historic handshake.  Indeed, the entire ceremony was themed around ‘unity’.

After 70 years of tension between north and south Korea, this has to be a landmark moment in the history of the Olympics.  And, given all the corruption scandals which embroil the Games, not to mention the shadow cast by the Russian team mass doping in Sochi, getting a combined Korean women’s ice hockey team to compete was yet another immense triumph, even if they didn’t win a medal.  As our parents always told us “It’s the taking part that matters” – never more true than here.

Oh… and also the 1,218 Intel Shooting Star drones coming together in the sky to form the Olympic rings and the shape of a snowboarder was pretty sensational too…. and a new Guinness World Record for the most unmanned drones flown simultaneously.  the footage was actually pre-recorded but 300 drones made a live appearance on the night to form the Olympic rings. 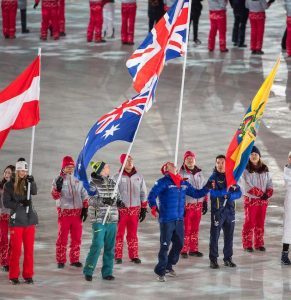 2) British athletes winning medals
Yes, indeed!  This was Team GBs most successful Winter Games ever – the five medals surpassing just four in the Sochi Games of 2014.  TeamGB fronted up a record number of snowsport competitors, with 25 competing in more disciplines than ever before across alpine, cross-country and free style alone.  14 of the squad were competing at their first games (one third of the squad were aged just 22 or younger, with only four having competed at more than one Games), and funding had more than doubled since Sochi.

There were plenty of PBs in the team, and some of our athletes were surprise medallists – Dom Parsons, Lea Deas, .  Lizzy ‘TheYarnold’ Arnold did brilliantly as the first Brit to maintain an Olympic title… in that crazy head-first-down-an-icy-track-on-a-tea-tray sport, the Skeleton.  And the victors weren’t necessarily always the medal hopefuls; we salute some lesser-known names – Dom Parsons and Laura Deas in skeleton, and Billy Morgan in Big Air.   PS: We just loved Billy’s audacity in carrying the British flag at the closing ceremony balanced on his forehead! 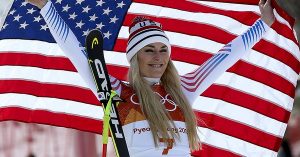 Vonn wins Olympic bronze in the downhill in PyeongChang 2018

3) Lindsey Vonn’s Olympic swansong
As 33 years of age, this was surely the last Olympic hurrah for, Lindsey Vonn, the greatest skier in US history.  Yet despite four overall World Cup titles to her name, her Olympic medal tally has never been as impressive, due to a host of injuries and misfortunes.  Going into these Games, she had a gold and a bronze to her name, and was primed for gold in the downhill and possibly a further medal in the Super-G.  She retires from the Olympics following PyeongChang with just one more medal to her name – the bronze in the Downhill.  At 33, she’s the oldest woman to win an Olympic alpine medal.  But, whatever the medal tally, few would challenge the fact that she’s the best female alpine skier of all time.  She intends to continue skiing on the World Cup circuit – her final career goal is to surpass Swedish legend Ingemar Stenmark’s record of 86 career World Cup victories.  You can read more in our recent feature ‘Lindsey Vonn retires from Olympics’ HERE. 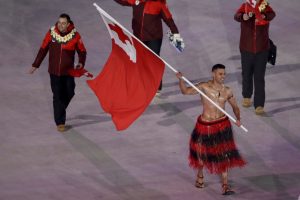 4) A Tongan cross-country skier
You may recall Pita Taufatofua, whose oiled, muscular body made front page news when he appeared half naked at the opening ceremony of the Rio Olympics in 2016.  There he represented Tonga in taekwondo.  This time he was back, to represent Tonga as a cross-country skier, having started the sport only after Rio, and having qualified only in January.  Although his cross-country skiing results were nothing to write home about, once again Pita stole the show at the PyeongChang opening and closing ceremonies (as we reported in an earlier story: ‘Tongan shirtless in PyeongChang subzero temperatures’ HERE). 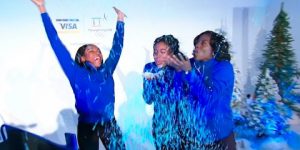 The Nigerian bobsleigh team, delighted to come 20th in PyeongChang

5) The Nigerian and Jamaican women’s bobsleigh teams
There was high drama at the bobsleigh competition, with two extraordinary stories behind the scenes away from the medal podium.  First of all, two Nigerian women became the first Africans to represent their country on ice – in a bobsleigh – in a Winter Olympics.  Three years ago, Seun Adigun (who’d competed as a hurdler at the London Olympics in 2012), decided to build a wooden sled and started practising in Houston, without snow.  Thanks to a 14-month, $75,000-plus crowdfunding campaign, she and team-mates and fellow former runners Akuoma Omeoga and Ngozi Onwumere, dubbed the ‘Super Eagles’  had a new sled and were able to take part as the first African bobsleigh team to compete at a Winter Games.  They came 20th.  They were delighted.

Later in the Games, the Jamaican women’s team hit the headlines for all the wrong reasons.  This was no ‘Cool Runnings’ but rather a scandal – having lost their sleigh in a bitter wrangle, a beer sponsor popped up and sponsored their campaign, only for one of the team to fail a pre-event drugs test – a veritable rollercoaster ride for the Jamaican team (as we reported in an earlier story HERE).  Not so cool runnings. 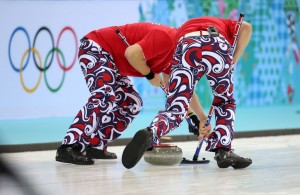 Each Olympic games since 2010 in Vancouver, the chaps have delighted us with their crazy patterns on and off the ice (as we reported in an earlier story ‘Norway’s crazy curling trousers are back’ HERE).  They even have their own Facebook page – the trousers, not the curlers.  Such a shame they were knocked out early and we didn’t get to see them (or their trousers) as much as in previous Games. 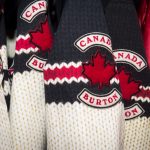 While we’re on the topic of clothing, we simply loved the Canadian snowboarder team jackets – they looked like knitted baggy sweaters.  So cool.

7) The thrill of new events
We loved watching competitors dropping down a steep slope, flying off a massive ramp and performing various tricks in the latest Big Air event to take the Olympics by storm.  Oh, and then there was James “Woodsy” Woods’ legendary commentary on it… possibly the most exciting sports commentary over the entire fortnight of the Games. 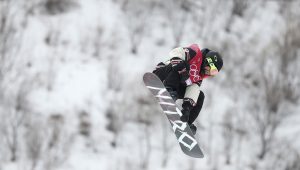 Other new events included a mass-start speed skating competition (with 24 athletes lining up for gold) and mixed curling (though Britain only had their men’s and women’s curling teams.  Curling’s still one of our favourite spectator sports (and not just because of the Norwegian men’s team trousers).  Like so many TV viewers across the globe, we sit glued to our sets nail-biting our way through ends for a fortnight every four years.

Also new to these Games was the BBC’s #Offpiste footage and twitter feeds, with families sending in their crazy attempts to try different Olympic sports at home.  A big shout-out to four-month-old baby @Littlelongc who, in the course of the Games, tried out most of the sports, in various dapper outfits.  I wonder what he’ll make of the photos when he’s older? 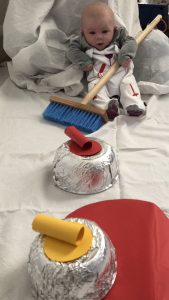 8) Olympic heroism
There were so many great moments of sportsmanship and heroism at the Games, it seems a fitting final highlight.  However, it’s hard to single out just a few.  These are some of our favourites:

The comeback of Rowan Cheshire in the half-pipe, who missed out on Sochi and nearly quit the sport after a series of injuries and illness.

Seeing Penny Coomes skate again with partner Nicholas Buckland, despite her being told she’d never skate again after a “career-ending” knee injury, and Buckland’s heart surgery a little over four years ago.  The emotion was palpable as they performed, both delighted with a top ten finish.

We rejoiced the moment Regino Hernandez won bronze in Snowboard Cross to become Spain’s first Winter Olympic medallist in 26 years; and Javier Fernandez become the first Spaniard to win a medal on ice when he took bronze in the figure skating.

We were stunned by the surprise gold medal wins by 22-year-old Czech, Ester Ledecka.  A total outsider,  ranked 43rd in the World Cup standings in the skiing event, she beat the defending champion Anna Veith of Austria by 0.01 seconds in a stunning performance to win Super-G gold.

Ester could not believe it – immediately after the race, she exclaimed: “It’s probably some kind of mistake, the are going to change it in a few seconds!”  At the ensuing gold medal press conference, to which she wore her goggles, the modest athlete explained: “I was not prepared to be at this ceremony, and I don’t have any makeup.” 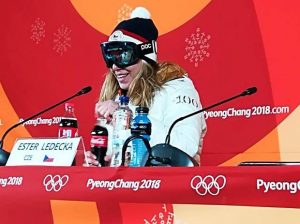 Ester Ledecka keeps her goggles on for her second gold medal press conference!

She then went on to win a second gold in the snowboard parallel giant slalom, making history as the first woman to win a gold medal in two different sports in a single Winter Games.  When questioned about the remarkable snowboard to skiing crossover, she simply replied: “Well, both are down a hill.”

But perhaps the best story of all to come out of the 2018 PyeongChang Winter Olympic Games was the Mexican cross-country skier, German Madrazo in the men’s 15km cross-country race.  Even though he was 26 minutes after winner, Swiss Dario Cologna, it didn’t stop Madrazo from finishing with pride, smiles and celebration at the finish line. It was a remarkable feat – he’d only started skiing in 2017.

He was beaten by Tongan Pita Taufatoula (see above), who met the criteria for entry into the games just one day before the deadline. “I sacrificed everything for this.  Today was a miracle.” Pita remarked after the race.  Pita was waiting on the finish line for German, where he and a number of fellow warm-weather cross-country skiers (from Colombia, Morocco and Portugal) hoisted him into the air in celebration.  They’d come 111, 113, 114, 115 and 116 (out of 116 competitors) and were all jubilant.  It was a hero’s finish, in true Olympic spirit – and the most heroic last place finish of all time.