In the Slovenian resort of Kranjska Gora, Austrian Marcel Hirscher has wrapped up the men’s World Cup Giant Slalom title with a race to spare, extending his dominance in the discipline yet further.

Today, just one day after his 29th birthday, the Olympic GS champion Marcel Hirscher looked untouchable from his very first run as he managed to secure an insurmountable 125-point lead in the Grand Slalom standings over Norwegian rival Henrik Kristoffersen.  (A win is worth 100 points).

The Olympic GS champion from Austria won the penultimate event of the season for his 56th career victory, giving him an insurmountable 125-point lead in the GS standings over Norwegian rival Henrik Kristoffersen. A win is worth 100 points. 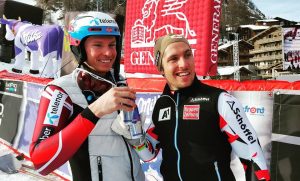 And he did it in style.  In both runs, Hirscher posted the fastest times.  He finished in 2 minutes 20.76 seconds, beating Kirstoffersen by 1.66 seconds.  Third-placed Alexis Pinturault of France was more than 2.5 seconds off the pace.

“I am very happy that it happened today… to me this comes as a little bit as a surprise as I haven’t been thinking about it. I was just thinking about the race. Normally you would need the calculator only in two weeks’ time.” Hirscher  said, referencing the forthcoming World Cup finals in Are, Sweden.

His main rival, Kristoffersen said: “Marcel is in his own league.  It’s OK at the moment, it’s OK that Marcel wins the globe. He is the best racer.”

Indeed he is.  He has won eight of the last 10 World Cup giant slaloms and reached the podium for the other two. The last time he failed to finish in the top three was when he placed fifth at the season-ending GS in St. Moritz, Switzerland, in March 2016.

This is Hirscher’s fourth straight GS title and his fifth in total, matching American Ted Ligety’s tally. Only the Swedish great, Ingemar Stenmark, won the trophy more times — a total of eight.

As well as his domination in GS, Hirscher is also expected to win the slalom title this weekend as he enters tomorrow’s race with a 144-point lead over Kristoffersen.  And with a lead over Kristoffersen of 269 points, he may also clinch an unprecedented seventh straight overall championship, with six races still to go.