Combatting the cold in Pyeongchang

How is this Winter Olympics likely to be different from previous Games? Well, Pyeongchang promises to be a particularly cold venue, and with first-time winter games teams arriving from such hot countries as Ecuador, Eritrea, Malaysia, Nigeria and Singapore, here’s how some of the competitors will be coping with the extreme weather challenges.

For years, the Winter Olympics were not all that wintry and temperatures rarely dipped below freezing.

But this year’s Games, which open on Friday in Pyeongchang, are expected to be the coldest in more than 20 years. Temperatures are scheduled to plummet to -15C (5F) at the start of the event,  and unlikely to get above freezing for the duration. Forcast strong winds will make it feel even colder.

One of the main concerns is the opening ceremony, which is expected to draw 35,000 spectators to the newly built stadium. At the inaugural event last November, several people had to be treated for hypothermia.

Now, despite a bill of $109m (£78m), the building still lacks heating and a roof. It was not built to last and will be torn down after the Paralympics closing ceremony in March. A few athletes are intending to skip the ceremony, including some from Australia and Italy, worrying that standing in the cold for hours could harm their chances in competition.

Other teams have come prepared. US athletes will wear electrically-heated jackets powered by a battery pack that tucks into an inside pocket, designed by Ralph Lauren. The hi-tech apparel costs about $2,500 apiece. The audiences in the stands will receive a welcome pack, which includes a seat-warmer, blanket, windbreaker and knitted hat. Good luck to them. 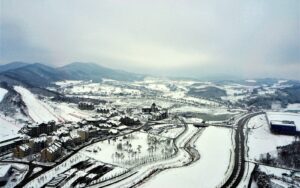 The volunteers will also also taking precautions at the various venues, wearing matching insulated trousers and thick coats. It’s going to be so chilly, metal door handles will need to be wrapped in thick fabric cosies to protect hands.

The previous time such cold  temperatures were recorded at the Winter Olympics was back in 1994 in Lillehammer, Norway, when temperature reached -11C. Pyeongchang looks likely to beat that by some margin.

These temperatures are wreak havoc on equipment – not only microphones, cameras and other recording equipment for all the media crews on site, but also ski equipment. Craig Randell, a ski course technician, told Reuters: “One of the coaches said they are throwing the skis out after today.

“You can’t do anything about it, but with the cold temperatures, the snow adheres to the ski base and twists it. They are turning their skis to garbage real fast.”

But we really can’t complain.  At the last games, in Sochi, Russia, everyone complained about the sunshine and slushy snow. Four years previously, in Vancouver, Canada, much of the snow was synthetic. One thing’s for sure, this time round, Pyeongchang Games promises to be a proper ‘Winter’ games.