With so much snow in the Alps, who’s up for a long weekend of skiing, snowboarding or even airboarding?  Our FamilySkiNews editor, Teresa Fisher, recently took her teenage son out to the small, characterful and little-known Swiss resort of Anzère for a couple of days of mountain R&R. 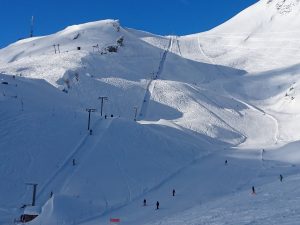 Empty pistes in the picturesque Swiss resort of Anzère

Let’s face it, there aren’t many resorts which are reachable for a weekend, without a lot of hassle and expense. But travelling to Anzère couldn’t be easier or more affordable.  An easyJet flight to Geneva, a pleasurable ride on the ultra-efficient Swiss train direct to Sion, plus a brief bus climb up the hill and you’re there ready to kick off your travel gear, don your salopettes and hit the slopes for a weekend on the white stuff.

Even if you haven’t got your own equipment, the resort is small enough to be able to hire equipment with speed and ease.  There’s none of the lengthy queuing you get in the larger ‘big name’ resorts.  My son and I were both kitted out in 5 minutes flat.  The ski pass office is at the foot of the gondola (no queues there either; a beginner pass costs just CHF10 a day once you ‘graduate’ from the free nursery slopes just off the village square), and a 10 minute cable car ride scoops you up to the top of the mountain.  What’s not to like?… 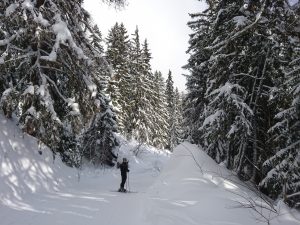 The new resort director for Anzère, Damian Indermitte, 38, explained his vision: “We aim to be the number one family resort in Valais in 5 years time.  We are already the sunniest!”

“We are investing heavily in the tourist infrastructure – we have introduced a free weekly programme of family activities; snow canons; a free shuttle bus; better lighting; and in summer activities – biking tracks, and other sporting events.” he said.

As for the skiing?  Well, it’s not a massive resort, but there’s plenty to keep you busy for a long weekend, with pistes to suit all standards, and it was remarkably quiet for a weekend – devoid of lift queues, and with beautifully groomed pistes.  Virtually all the slopes are south-facing (so gloriously sunny), the lower ones are tree-lined and especially picturesque, and the scenery is spectacular.  On a clear day, you can see many of the iconic 4,000-metre-plus peaks of the Swiss Confederation as well as Mont Blanc. 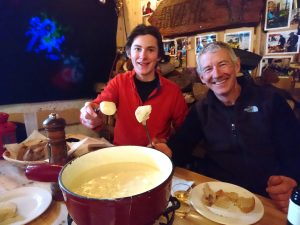 Fondue in the stables at ‘Chez Poustof’

On the piste, you’ll find some cracking restaurants for a warming chocolat chaud or a glass of Swiss wine – I recommend the canton’s ubiquitous white, Fendant, or the red, Dole.  Our favourite slope-side restaurant, the Ecurie de Tsalan (locally dubbed Chez Poustof, after the charismatic owner), was once a cattle shed, but is now a cosy, rustic setting for an authentic Swiss motié-motié fondue (a mixture of Gruyère and Vacherin cheeses) by the wood-burning stove.  In the self-catering restaurant at the top of the gondola, the Pas de Maimbré (2,362m), we enjoyed an afternoon of live music, performed by the Spencer Chaplin Trio.  The lead singer was Charlie Chaplin’s grandson!  There’s even the option at some huts to take your own sausages and cook them on an open-fire.

Although we were only there for the weekend, my son and I managed to fit in a session of air-boarding as well as a couple of full days skiing.  We were both beginners so Simon Smith, our wonderful, kind and patient instructor (and ski-guide on the mountain) from Glycérine Ski School, took us for some after-hours ‘off-piste initiation’ on the toboggan run beside the nursery slope, just by the main village square. 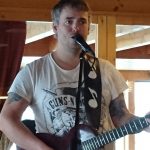 Air-boarding is rather like head-first tobogganing, or the Olympic sport of ‘skeleton’, but on a triangular-shaped lilo – fast, bumpy and hard to control!  At least, I thought so, as I picked up momentum and tried, in vain, to brake using my elbows (not a technique to be recommended) as I careered towards spectators in the village square.  Needless to say, my 15-year-old son was considerably better at it than me.  Despite our differing capabilities, it was a huge laugh!  On Thursdays, there’s free air-boarding at 4.30 for anyone aged 10+. 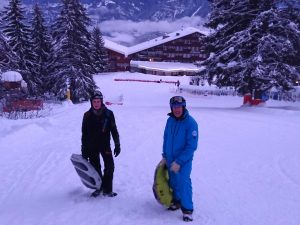 Airboarding on the nursery slope in front of Hotel Zodiaque

The village itself has an intimacy and a strong sense of community.  The main square is entirely pedestrianized.  Families were out playing with their infants in the snow in the main square – there’s an open-air ice-rink there too at the height of the season and sledding races every Sunday afternoon at 2pm.  The nursery slopes were full of children, sledging, snow-ploughing, snow-ball fighting, laughing… it felt like a true Swiss ‘family’ resort.

If you’re one of the many people are put off at the thought of skiing in Switzerland being cost prohibitive, think again.  In Anzère, a ski pass will set you back just CHF52/26 (adult/child) per day (compared with CHF69/39 in neighbouring Crans Montana; CHF75/38 in Verbier and CHF79/40 in Zermatt – other popular Valaisan resorts); accommodation is in three sizeable but modestly-priced chalet-style hotels – book by the night or just for the weekend – or you could opt to stay in one of a handful of AirBnBs.  We stayed at the friendly, family-run Hotel Zodiaque on the main square, in a spacious room with kitchenette – ideal for families. 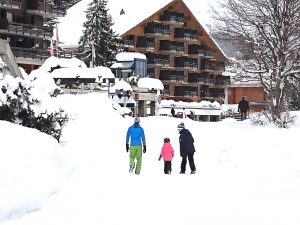 A stroll through the car-free village square

For those with young children, there’s a creche in the neighbouring village of Ayent, just ten minutes by free shuttle bus from Anzère, which takes infants aged 10 months+.

Back in resort, there are plenty of affordable options for evening meals.  We had a particularly tasty crepe in Le Raccard (pancakes from CHF6) and a mouth-watering burger, with local Valaisan beef and raclette cheese, in The Burger Terrace (burgers from CHF15, all local produce including beef from Valaisan black Hérens cattle). 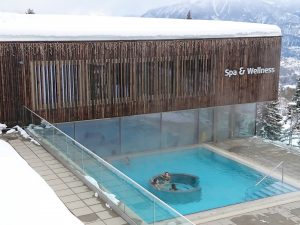 The Spa and Wellness complex is a must-visit!

When it comes to apres ski, you’re rather spoiled for choice, given the resort’s pint size.  I’ll admit, it’s not exactly Zermatt or St Moritz, but there are a handful of cosy bars, a disco, a crazy new attraction – HouseTrap (the ultimate team game, see our feature HERE to see if we managed to win or not) – and a gorgeous indoor-outdoor pool complex, with a tranquil adult-only sauna/Jacuzzi/steam room zone, where we spent our early evenings relaxing after a day on the slopes.  Treat yourself!  Entry costs CHF16/11 (free under 6) for two hours – but make sure you bring your own towel, it’s expensive to hire one.

Currently, there are no British tour operators bringing skiers to Anzère and, we must confess, that was part of the draw for us.  It felt authentic… not geared to tourists… the real deal, our own secret resort, a hidden gem.

My teenage son and I thoroughly enjoyed our long-weekend in Anzère.  To sum up its appeal?… small, atmospheric, little-known, affordable, quiet pistes, no lift queues, sausages on the slopes, the spa/pool, HouseTrap, the fondues, the picturesque car-free village…. need we go on?  It’s one of those hidden gems a journalist is always somewhat reluctant to share in case it loses it’s bijoux appeal but, of course, it’s also a resort which everyone should know about, because it’s such a fantastic family destination. 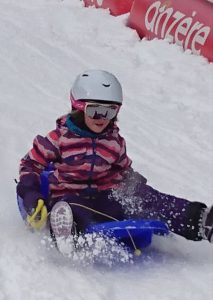 Toboggan races take place for all ages at the weekends

On our final day, there was even time for a full day of sunny Sunday skiing, a snatched crepe en route to the bus, the train, the plane, then home to bed – ready for school bright and early on Monday morning!  A perfect weekend.

The snow is better now than it’s been for years.  In our view, it’s never been a better time for a ski weekend and it’s so much easier to organise than you might think.  Thanks to Swiss efficiency and punctuality, surprisingly unstressful – we found we arrived relaxed and ready to enjoy our mini-break from the very get-go.  So, what are you waiting for?  Give Anzère a go.  We promise it won’t disappoint.

Teresa and her son travelled with easyJet and SBB railways.  They stayed in Hotel Zodiaque on the village square.  With many thanks to Anzère Tourisme and ESI Glycérine ski school. 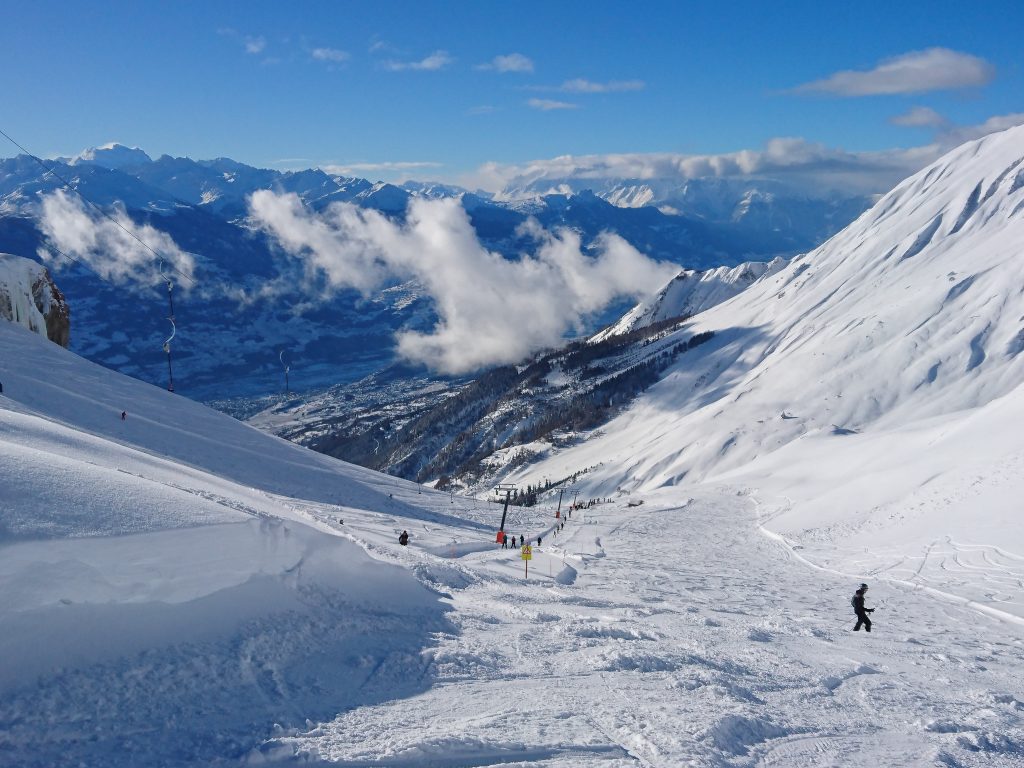 Combatting the cold in Pyeongchang