The FamilySkiNews editor, Teresa Fisher, recently found herself trapped in a house in the Swiss resort of Anzère… intentionally!  Yes, Anzère is the first resort in Switzerland offering the latest game craze, HouseTrap – could this be a whole new genre of après ski?  Read on to find out how she got on…

When it comes to après ski, my first thoughts on being locked in a small room for an hour doesn’t necessarily sound like my idea of fun.  However, the brand new ‘HouseTrap’ at Anzère has changed my mind.

You may have heard about, or even visited, ‘house traps’ or ‘escape rooms’ in other countries.  They are the latest craze – the general concept is to ‘escape’ the room by finding clues and solving puzzles within a given time frame.  We were a group of five – three adults and two kids aged 15 and 8, about to be locked in together for the evening in the first HouseTrap to be located in a ski resort. 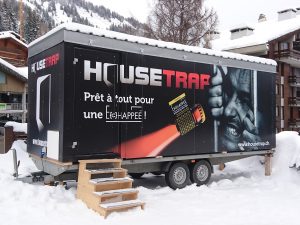 HouseTrap, in the middle of Anzere – the first resort in the Alps to offer such an ‘apres ski’ activity

From the outside, Anzère’s ‘HouseTrap’ looked somewhat unremarkable – a large container in a hotel carpark.  However, from the moment the door clunked shut behind us, we were immersed into a universe of make-believe, of sci-fi characters and computer game heroes – Mario, Pokemon, Star Wars, Pacman….  The kids were thrilled – they had an immediate advantage over the adults, they knew all the characters!

However, this wasn’t about competition – it was all about teamwork.  Working together under time pressure (we had exactly one hour) to solve a series of clues which would hopefully lead to our escape.  The room was full of cupboards, shelves, pictures, clothing, hooks, slots, pulleys, knobs and buttons, plus numerous ornaments (the various characters).  Our pre-game instructions were minimal: don’t force anything open – if it doesn’t open easily, it’s not meant to, and don’t press the big white button by the door unless it’s an emergency, as that will stop the clock, reset the room to its original format and end the game! 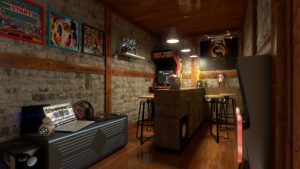 HouseTrap – the interior was full of puzzles, clues and codes, all around the theme of fantasy movie characters

Our first clue was to line up six figures – it took us ages to locate them all.  Once they were in place, this led to another clue, and another, and so on.  We had to put “the map in the house”…. “the key in the chest”, etc, etc… and each time it would open another cupboard, set off a ball run or a sequence of lights, open a box, release a trap door… We don’t want to give too many clues away, but we can say the game required ingenuity, lateral thinking, logic and common sense – it was ingenious for its simplicity.  The kids were much better than the adults – they seemed to take all the clues at face value, while we all over-thought things.  It was surprisingly absorbing.

Time went rapidly and, every now and again, our host (watching and listening to our every move from another building) posted the occasional extra clue on a monitor in the room to nudge us in the right direction.  We thought we were doing rather well when, with just five minutes to go on the stop-clock, the youngest in our party decided he needed the toilet and, unable to open the door, pressed the white emergency button!

Bang!  End of game!  Can you believe it?!… So near and yet so far.  Our host came in and showed us the rest of the game – we were just two clues away from completing…! 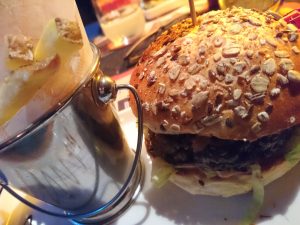 The best burgers in town – at The Burger Terrace

In fact, we were buzzing for the rest of the evening, as we tucked into well-earned mountain-high, juicy, flavoursome burgers in The Burger Terrace, just a couple of minutes up the hill from the HouseTrap.  The burgers here are made from the local beef of the Hérens black cattle, unique to the Valais canton of Switzerland – plus a slab of raclette cheese, crispy bacon, a dollop of red onion confit and a locally baked bun.  No wonder these are the best burgers in resort!

By the end of the night, we all agreed that we felt a great sense of camaraderie and achievement, that we’d each played a vital part in cracking the codes, and we’d all had a good laugh about the abrupt end of the game!  We figured HouseTrap was a brilliant, new and unusual addition to the resort of Anzère – a really alternative àpres ski activity, and one that we’d all love to do again. 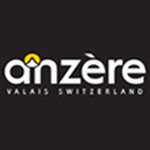 HouseTrap in Anzère is a unique  team building experience for people of all ages and skill sets – huge fun for families (children over 7 are allowed in, if accompanied by an adult), groups of friends, colleagues… You don’t need any special knowledge to succeed.  You just need to be creative and curious.  For more information, or to book your ‘escape’, click HERE, email: info@housetrap.ch or phone +41 27 519 00 26.

Tips to help you escape HouseTrap in Anzère:
1 Act quickly – Time is of the essence.   60 minutes goes in a flash.
2 Working as a team is the key to your success – everybody’s viewpoint, whether young and old, is useful knowledge.  The more brains the better, but remember – arguments and disagreements waste precious time. If you find something you think could be relevant, shout it out to your team mates.
3 Be observant – everything in the room is there for good reason. Clues are everywhere!
4 Ask for clues (if you need them).  Some people don’t like to ask for help but, in the interests of time, it might be useful to have the occasional hint… the hosts are highly trained in giving vague but helpful nudges in the right direction.
5 Don’t over-think – of course, no idea is a bad idea when trying to solve the clues, but try not to over-complicate things.  The HouseTrap is designed to be tricky, filled with clever puzzles to get your grey matter going, but its success is in its subtlety and logic.