Welcome to the 2019/20 ski season.  As the FamilySkiNews team dust off their ski boots and sharpen their edges, we’re pleased to report there’s already been a dusting of snow in the Alps.  Snow in the mountains in early September is not unusual, but in recent years it has been less common. 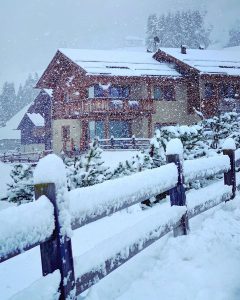 The heaviest snowfall in the Alps is currently in Northern Italy and Western Austria.

Livigno has been transformed from late summer straight into a scene from a Christmas card.

In St Anton, the mountains turned white overnight at the weekend.

The Stubai glacier region opens in the Tirol this Friday. They are reporting snow depths of over 70cm on upper slopes, with more to follow this week with the stormy weather currently hitting Europe– the tail-end of hurricane Dorian.

Not only in Austria, but in Switzerland too, with snowfall down to 1400 metres in places, most notably in the Gotthard region where there was up to half a metre of white stuff above 2,000m. This led to traffic disruption on the Furka, Grimsel and Susten passes in the area, and also the San Bernadino, linking eastern Switzerland to Italy. 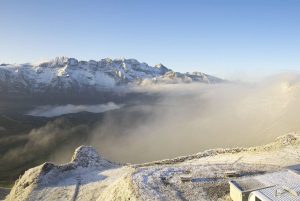 Four glacier ski areas will be open in the Alps next week – Soelden and Hintertux in Austria, Passo Stelvio in Italy and Zermatt in Switzerland, and they’re expecting around 30-40cm of fresh snowfall over the next 24 hours.

In France too there’s early snowfall, most notably in high resorts, such as Val Thorens, but also in lower resorts including Portes du Soleil. 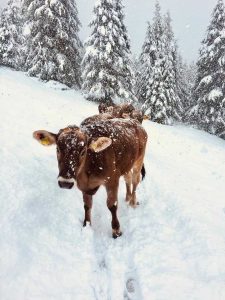 The seasons (and the cows) are confused!

FamilySkiNews is off to Switzerland  – to Zermatt and St Moritz – next weekend, for some pre-ski-season hiking. Having seen the forecast for the rest of the week, we are repacking our bags, binning the shorts and swapping in gloves, hats and winter hiking socks!

But before we go, we’re off to London to meet up with other ski industry representatives… so there’ll be plenty of family ski news coming your way again very soon – including early-bird offers, the latest gear, family-resort-reports, kiddy-friendly hotels, alpine recipes and lots more.