Our editor Teresa Fisher is in Zermatt ready for the opening of the celebrated Swiss ski resort’s latest lift, the Matterhorn Glacier Ride on Saturday 29 September. The largest ever construction project by Zermatt Bergbahnen AG, it will be the world’s highest 3S cableway lift and will operate 365 days year. 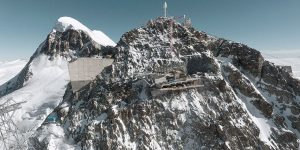 Three summers of construction work, 38 companies from Switzerland and Italy, 145 workers and an investment of a whopping CHF52 million all comes to fruition this weekend, with the maiden trip of the new Matterhorn Glacier Ride – the most impressive high-alpine construction project undertaken in the Alps in recent years.

It has been constructed by LEITNER ropeways to replace a previous cable car which was often closed by high winds.  The new 3S (three-cable system) cableway that’s been installed can now withstand extreme weather conditions. 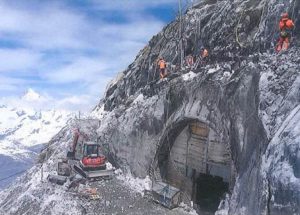 And extreme weather conditions have also played a major role in the construction.  For three years, it has been the highest building site in Europe.  Construction workers have had to work in heavy duty expedition gear, on exposed and precariously steep terrain, with daytime temperatures at times as low as minus 30 degrees and wind of up to 240 km/h.  Due to the lack of oxygen at altitude (almost 4000m above sea level), the workers could only perform at around 60-80% of their normal physical capacity.  The weather and the reduced air pressure also affected the materials – concrete had to be mixed at a lower elevations and transported to the site at specific temperatures.  The construction machinery also had to be modified to cope with the extremes of terrain and temperatures.  It has been a true feat of Swiss alpine construction. 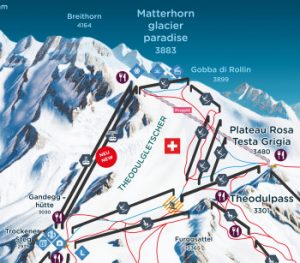 The venue for the celebrations will be the newly-built valley station at Trockener Steg (2923M).  From there, the ultra-modern 3S cableway will glide to its destination 900m higher up, to Europe’s highest mountain station, the Matterhorn glacier paradise (Klein Matterhorn) at 3821m.

The ride comprises 2 cabins, each seating 28.  With a carrying capacity of 2000 passengers an hour, waiting times will be a thing of the past to reach Zermatt’s year-round glacier ski area.  The journey will take nine minutes, at a travel height of almost 200m above the ground. Local mountain guide and ski instructor Heidi Perren said: “This was the last place in the ski resort where there was always queues.  This will now all change.  There won’t be any lengthy waiting times once this new lift opens.”

The day’s celebrations will kick off with the premier of a historic film called “Klein Matterhorn past and present” and a few speeches, followed by a nail-biting performance by 53-year-old Swiss stuntman and high-wire circus artist, Freddy Knock.

Tight-rope walking the new cable is just another day ‘at the office’ for Freddy.  He  already holds the world record for the highest high-wire walk, the longest cable walk, the fastest sky-walk between two hot air balloons and the longest time on a Wheel of Death.  His performance is guaranteed to be thrilling. 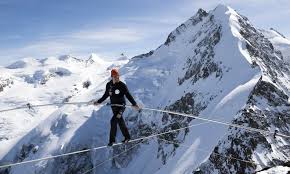 Then, after the cableway has been blessed, the ceremonial red ribbon will be cut and the proceedings will move on to the main highlight of the opening celebrations: the maiden trip to Matterhorn glacier paradise.

The ride promises to be an unrivalled combination of technology and design.

VIPs will ride in the most stylish cabins in the Alps – designed by PININFARINA, an Italian car design firm renowned for its work with Ferrari and Maserati. The seats are inspired by principles used in car manufacture and the ceiling lighting will resemble a starry sky.

Four of the cabins – the “Crystal Ride” cabins – have been further embellished with thousands of sparkling Swarovski® crystals – a world first in the cable car sector.

But the piece de resistance is undoubtedly the cabin floors. Three minutes into the journey, the previously opaque glass floor of the Crystal Ride cabins will clear in seconds to offer a dramatic view down onto the glacier landscape.  This effect is made possible by an active laminated glass sheet which turns from milky white to transparent under the effect of an electric current.

“The Crystal Ride cabins will surprise our guests with a completely new ride experience.  Now they will be able to marvel at the mountain world around Zurich in a unique 360-degree panorama”, said Sandra Stockinger, Head of marketing for Zermatt Bergbahnen AG. 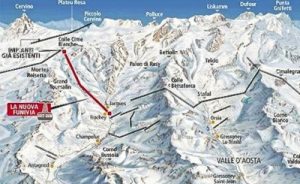 The bigger picture – The Alpine Crossing

The unique combination of technology and design in the new 3S cableway is a first in the Alps, and is sure to become a special attraction for visitors to Zermatt. But the construction of the world’s highest 3S cableway is just the first stage in a much more far reaching vision – to create a continuous connection between Zermatt and Italy, the so-called “Alpine Crossing”.  Zermatt and Cervinia have been connected for many years.

The Alpine Crossing will incorporate the Monterosa ski region (including the Italian resorts of Champoluc, Gressoney and Alagna) and will be completed by a further link between the stations at Testa Grigia and the Matterhorn Glacier Paradise.  This will create one of the biggest ski areas in the Alps. It is currently at planning stage, to come to fruition in the next five years.