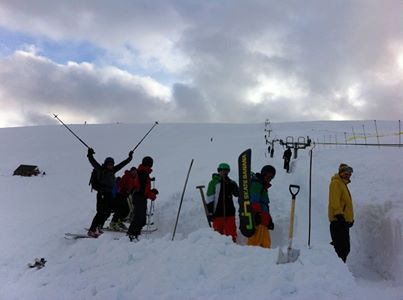 In Cumbria, in the Lake District, there’s loads of snow and there’s even a Lake District Ski Club to enjoy it!

The Lake District Ski Club operates one ski lift on Raise, near Helvellyn, and in places this weekend there was as much as 5 metres of snow.

Volunteer members of the club had to dig out the lift this weekend so that the ski area could operate.  They were beaten by the elements on Saturday but managed to get the lift running on Sunday and spent the day enjoying powder turns in England!

Snow conditions at the Scottish ski mountain resorts are also excellent at the moment – perfect for half-term skiing.  The Nevis Range claims to have more snow than ever before and hopes it now has enough snow to remain open well into the spring.