Fresh powder for the Kaunertal Opening

If this new YouTube clip from the Tirol doesn’t get you in the mood for skiing this winter, we don’t know what will!

It was filmed at the weekend at the opening of the Kaunertal Glacier, following half a metre (yes… half a metre!) of fresh snow fell in just 24 hours.

Several glacier areas are now open in the Tirol.  Their snow depths are currently 75cm on the Sölden Glacier; 86cm at Pitztal; 93cm on the Kaunertal, 100cm at Stubai, and 135cm at Hintertux.

The Kaunertal Opening, with its Freestyle Contest in the Snowpark, is just one of a series of Opening events, concerts and parties in the Tirol in the forthcoming weeks.

It seems like only a matter of weeks since we were bringing the last season to a close in style in the Tirol in our feature It’s party time, which featured Mayrhofen’s Altitude Comedy Festival and Snowbombing celebrations, and Ischgl’s Top of the Mountain end-of-season concert, starring Deep Purple.

Now, it’s party season once more in the Tirol!

Forthcoming highlights include the fifth annual Moreboards Stubai Premiere – an action-packed weekend of freestyle contests, coaching and partying in Neustift from 18-20 October.

The World Cup season kicks off in Sölden, drawing all the world’s best male and female Alpine ski racers to its slopes on 26-27 October for the Sölden World Cup Race Weekend.  Racing takes place on the Rettenbach Glacier high above the town, with the Giant Slalom on Saturday on one of the steepest courses on the circuit. 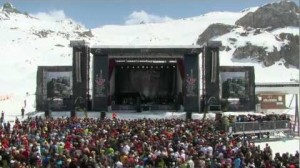 Mariah Carey headlined at Ischgl’s Top of the Mountain 2012

That same weekend, on Saturday 30 November, Ischgl celebrates the start of its ski season with its notorious Top of the Mountain Opening Concert.   The resort has built a reputation for drawing top names over the years, including Elton John, Katy Perry, Mariah Carey, The Scorpions and Rihanna to its opening weekend.  This year, Canadian rock band Nickelback will be headlining.  The concert that’s free to anyone with a valid ski pass.

Once Ischgl’s Top of the Mountain Concert is on, you know the ski season really has begun!