Spring has most certainly sprung in the Alps, the mighty spring thaw has begun and, right now in the mountains, it’s hot, hot, hot…

FamilySkiNews is currently in St Anton, in the Arlberg region of the Austrian Tirol, where temperatures have soared into the mid-20°Cs in the valley in the past couple of days – due to the Foehn wind. 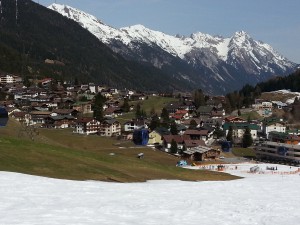 No snow beyond the Nasserein gondola at St Anton

The exceptionally warm weather in the Tirol currently is due to the Foehn wind – a front of warm air from the south which has resulted in major melt on lower and mid-level slopes.  It’s shorts and t-shirt weather in the Alps – we’ve even seen a number of skiers in Lederhosen today!

In some parts of the Alps the freezing level is as high as 3000m, due to the Foehn.  This is really bad news for the lower resorts and any slopes below 1500m, which are pretty much unskiable now.  It essentially means that, in order to find any decent firm snow, you need to go really high – in the Tirol, this means skiing the glaciers, or heading to the highest resorts, such as Ischgl and Obergurgl.

There’s also been cloud cover overnight in much of the region for the past couple of nights, including St Anton where FamilySkiNews are skiing. This has prevented a good overnight refreeze, resulting in very slushy conditions on piste from midday onwards (or even earlier in places).  It’s hard to describe the snow really…. think semolina, slush-puppy drink, or wet sand.  It’s tough on the leg muscles, that’s for sure.

The good news, however, is that the pistes are very quiet – surprising given we’re still in the midst of the school Easter holidays, and the snow’s great first thing in the morning, before the surface begins to melt.  Anything below 2000m really isn’t worth bothering about after lunch though – so it’s best to pack in your skiing early and focus on some apres-ski! 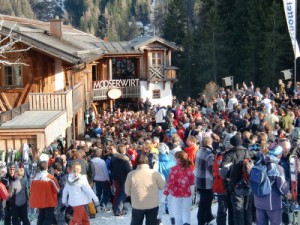 The snow may be poor on the lower slopes of St Anton, but the sunshine’s glorious and, as always, the après-ski here is second-to-none!

Today and tomorrow should see some more sunshine in the northern and eastern Alps, and continuing high temperatures before colder air (and hopefully some light snow fall high up) comes our way late on Tuesday.  Friday is looking more changeable with considerably colder temperatures and heavy snowfall – bad news for those people transferring back home on Saturday although, if you have a late transfer, it may well be worth extending your ski pass an extra day getting in your final powder turns of the season.