Everyone is still looking for a late ski deal but if you can’t find anything left for this season, it’s well worth considering an early booking for next season to grab yourself a real bargain. 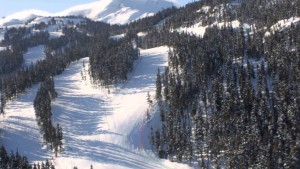 For instance, if you book by 30th April, you can guarantee your ski holiday for January 2017 at some of the lowest prices ever seen to the world-class Canadian resort of Whistler in British Columbia.

With (once again) near record breaking snowfall, everyone is keen to get back to Whistler for next season. This exclusive deal to Whistler starts from only £869 per person for 11 nights, based on 2 people sharing a Studio, staying at the little known property, Le Chamois in Whistler. It’s a true ski-in ski-out condo at the base of Blackcomb Mountain.  The price includes flights from Gatwick to Vancouver with AirTransat and transfers.

Host of the 2010 Winter Olympics, and with slopes to suit all standards, Whistler draws skiers and boarders from around the world.  It boasts over 200 trails spread across its two peaks (Whistler and Blackcomb Mountains), and holds the record for the most skiable terrain of all the North American resorts.  It is fully deserving of its long-standing reputation as one of Canada’s premier resorts, and it also offers some of North America’s best early ski deals, with up to 60% off holidays for next season and up to 70% off lift passes.