He was possibly the most talked about athlete at the Rio Olympic Games in 2016, but now Pita Taufatofua is back for the Winter Olympics and once again shirtless… 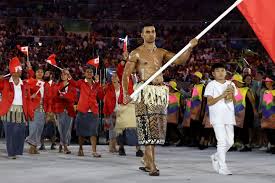 Pita Taufatofua – bare-chested at the Rio Olympics in 2016

Tongan athlete Pita Taufatofua made a name for himself at the Rio Olympics in 2016 when he appeared shirtless in the arena at the opening ceremony, carrying his nation’s flag, before competing in judo and taekwondo.

Now, not only is he back for the Winter Olympics as a cross country skier, but once again he again was shirtless and slathered in oil, as he carried the flag, leading the Tongan delegation, at PyeongChang’s opening ceremony — but this time in freezing temperatures that dipped below -15 Celsius in what is considered to be the coldest Winter Olympics in twenty years.

Weather conditions were so cold that some athletes skipped the ceremony, including some from Australia and Italy, concerned that standing in the cold for hours could affect their performance in the competition. 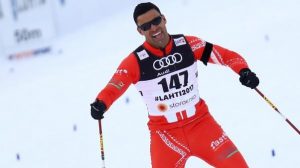 Even Pita hadn’t planned to be shirtless.  Before the ceremony, he said: “I want to still be alive for my race.  It’s going to be freezing, so I will be keeping nice and warm.”

But something clearly made him have a change of heart as he came out wearing the same national outfit which he’d worn in Rio, in somewhat warmer climes.

Good luck Pita.  We loved seeing you in your national costume again but we very much hope, for your sake, that you put on some more suitable clothing for the skiing!