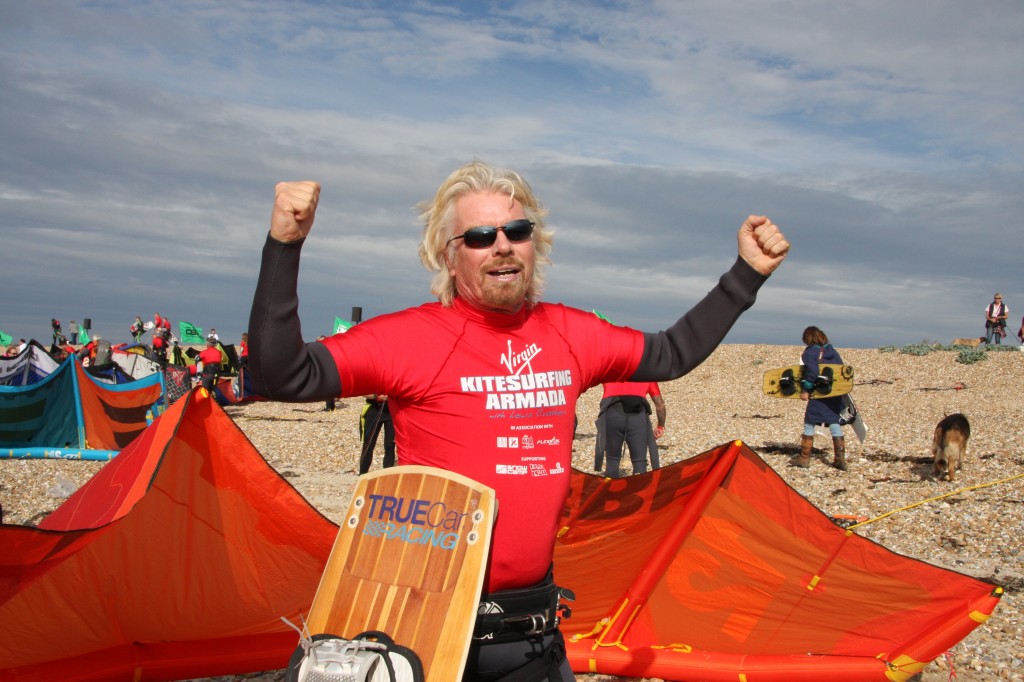 Sir Richard Branson took to the seas today to break a new world record, and to raise money for the ski charity Snow-Camp.  It is a charity that helps inner city children get involved in snowsports. 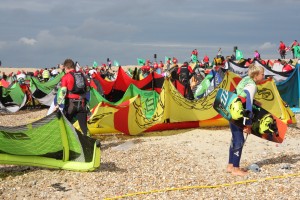 Getting ready to start the Virgin Kitesurfing Armada 2013

He was joined by 318 others in Hayling Island in Hampshire.  Everyone kitesurfed for one mile together the Virgin Kitesurfing Armada 2013 in perfect conditions – sunshine and a brisk 20 knots of wind – to smash the record (they needed at least 250 riders to set a new Guinness World Record).

As the breeze picked up, many of them continued further east, raising more money as they went, in The Big Charity Downwinder, all the way to Lancing in Sussex, 46 miles away!  The participants paid £20 to enter the event, and each had to raise a minimum of £100 in sponsorship to participate.

FamilySkiNews previewed the event in this earlier story on FamilySkiNews, and today we were there to watch.  Before he set off, we had a chat with 63-year-old Richard. You can see some of our interview below: 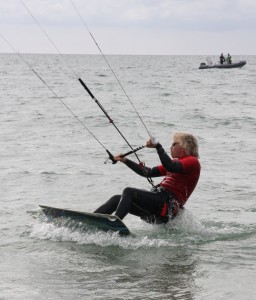 FSN: When did you take up kitesurfing?
Sir Richard: “I took up the sport at least 12 years ago, just as kitesurfing was being invented.  It’s one of the best sports there is.”

FSN: What’s so great about it?
Sir Richard: “You’re away from the hustle and bustle of live… just bouncing across the waves.  It keeps you fit.  It keeps you away from phones, blackberries… it’s a great thing to do.  Everybody needs to find an hour a day to look after your body.  I jus t like finding the most fun ways to do that.”

FSN: So another record hopefully for Virgin?
Sir Richard: “Yes, I hope so.  I love to try to break records with my family.  We set ourselves a challenge every year and try and get fit for it.  I love the personal challenge and I love the technical challenge too.  And kiters are always up for a challenge.” 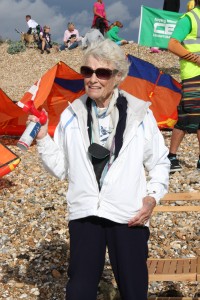 FSN: Are you being joined by any of your family?
Sir Richard: “This is very much a family event today but sadly my family can’t be with me on the water as they are hosting a cricket match!  My mother is here to cheer me on.  I’m sure the others will be here next year though.  We have 300-plus kitesurfers today, maybe 600 next year, 900 the next…  It’s all about getting people active.“

FSN: And today’s charities?
Sir Richard: “Snow Camp does wonderful work with kids, Virgin Unite’s great, and the RNLI have rescued me on many occasions.  The Virgin Kitesurfing Armada is a fun and fantastic way of raising money.  It’s really nice to give back.”

FSN: You’re a highly experienced, long-distance kitesurfer, having previously crossed The Channel on a board.  Do you have any concerns about today?
Sir Richard: There’s certainly a perilous aspect, with the potential for kites getting tangled up in the sky.  I’ll lead the charge… stay well clear of me, I’m glad I’m going first!“ 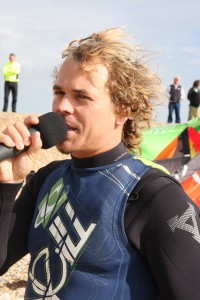 The record attempt was very much a family affair for Branson.  His 90-year-old mother, Eve Branson sounded the start gun for the challenge to begin.  It was a true spectacle – the sky was a veritable rainbow of kites, as he set off, followed in quick succession the remaining 300-plus kitesurfers.

They included British kite stuntman Lewis Crathern, famed for his leap over Brighton Pier, who sailed with the entire fleet to Lancing.

The youngest riders on The Big Downwinder were Tom (12) and Guy (14) Bridge – both junior kitesurfing champions on the European and world circuits, sons of Steph Bridge, four times world race champion, and her husband Eric.  They had travelled up from Exmouth for the event.  It really was a family affair! 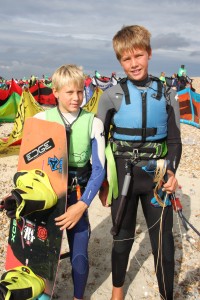 Tom and Guy Bridge, the youngest participants at 12 an 14 years

“I’m so proud of my son… and I’m very glad the RNLI are here too to keep an eye on everyone” Eve Branson cried.  “I’ve just written a book on my son.  I now need to add another chapter.  I think it’s going to be an ‘on-going’ book!”

After much nail-biting, those of us who had remained on terra firma received the news that the record had been broken.  It was witnessed and recorded by Craig Glenday, Editor in Chief and official adjudicator from the Guinness World Records.

“We are delighted to have set this new world record for the largest parade of kite surfers ever.  It’s been phenomenal to see the response of the kite surfing community coming together to support this first kite surfing Armada event.” said Dan Charlish, Director of the Brighton-based charity Snow-Camp, who created and hosted the event.

He continued: “To be led by Sir Richard Branson was just fantastic.  We have raised about £60,000, which is an incredible platform to build on over the next 5 years.  This allows us to offer the unique combination of skiing, snowboarding and life-skills programmes to support many inner-city young people.” 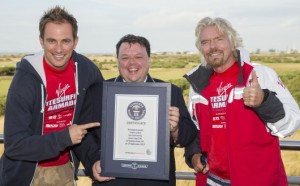 An exhilarated Richard Branson eventually emerged from the waves, barefoot in his wetsuit, much to the relieve of his mother who exclaimed: “Ah… here’s my baby!”

We also chatted to Sir Richard about skiing and Verbier.  Click back later in the week to the FamilySkiNew website to hear what he had to say!