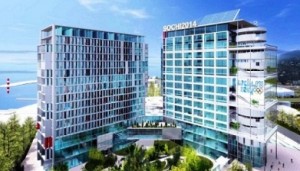 RIOU was originally set up in Moscow in 2009 as part of the Sochi2014 legacy plans. Its headquarters will now move to the new state-of-the-art Sochi campus where it will provide a place of study for Russian athletes, as well as international athletes.

RIOU Professor and Rector of the University, Lev Belousov remarked: “Our goal is to train the next generation of sports leaders by drawing on the vast Olympic knowledge and experience that RIOU’s professors, visiting experts and the Sochi 2014 Organising Committee possess.”

At the opening, President Putin was quizzed on preparations for the Games, and admitted that there were some ongoing hitches: “Despite the large amount of work that has already been done, there are still ongoing glitches and delays in time frames.”

He continued: “”Overall it’s a normal thing for such a large project.  There’s nothing out of the ordinary. We know the time the Olympics start, and we can’t slip at all.”

Putin pledged to attending the Sochi sites more frequently to ensure everything remains on course, and also revealed that he has requested his deputy Kozak to send him fortnightly progress reports.

September snow in the Alps