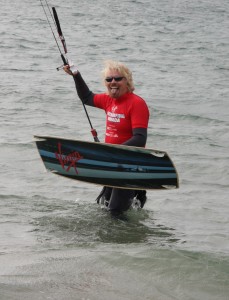 Branson will attempt another world record!

Over 300 kitesurfers are expected to take part in a big charity Downwinder – 45 miles of kitesurfing, as we reported in an earlier story here, to raise money for Snow-Camp, the UK’s  only charity using skiing, snowboarding and life-skills to support inner city young people.

Other charities tomorrow are Virgin Unite and the RNLI, a charity close to many kitesurfers hearts.

If you’re coming along to support the event, here’s some general information for spectators:

and a briefing for participants (NB you need to be intermediate kitesurfers or above to take part):

The world record is assessed only over the first mile of the course.

Snow-Camp is a truly great cause – its innovative programmes use a unique combination of skiing, snowboarding and life-skills programmes to support and enable inner-city young people to reflect on the key issues impacting their day-to-day lives, and help them develop new skill for their futures – with special focus on careers in the snowsport industry. This year, it  is working with around 500 young people across 12 London Boroughs.

Together with Branson, the other ‘celebrity’ kitesurfer is pro Lewis Crathern.  With a clutch of titles and championships under his belt, he is however perhaps best known for jumping Brighton Pier back in the gales of November 2010!

Regarding tomorrow’s event, Lewis remarked:  “I’ve never been involved in anything like this before.  It’s going to be a huge challenge but if we can make it happen it will be an amazing achievement.  I think this is an event kitesurfers will want to come together to support and get involved with – plus the chance to be part of a world record attempt adds to the appeal!”

Snow-Camp director, Dan Charlish and Chris Bull of CBK Kiteboarding tested the route during the summer to ensure it was achievable.  They set off from Hayling Island at 7am and arrived in Lancing 3 hours and 16 minutes later, in solid 20-knot SW winds, averaging 23 kilometres per hour. 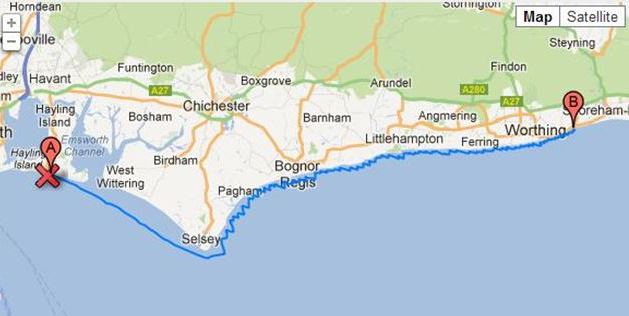 “It was an amazing morning” said Dan afterwards, “the route is just the right distance – it’s a tough challenge but still great fun. The last 5 miles were pretty tiring and the legs were struggling a bit by then – but that only added to the sense of achievement landing at Lancing. It will be unbelievable if we can do this again in September with 250 kiters!”

Currently the forecast for tomorrow is good, with moderate winds in the morning, due to increase around midday.

The event promises to be a blast on the water… and a real spectacle for those watching on terra firma.

Good luck everyone and see you tomorrow!