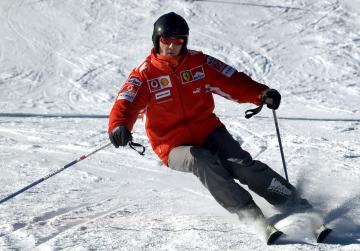 The latest Michael Schumacher report from the Grenoble hospital stated this morning that the F1 racing driver is “still in a critical condition”.

Schumacher suffered a major trauma to the right side of his head, when skiing in the French resort of Meribel with his 14-year-old son and friends yesterday morning.  It has unclear whether he hit his head on a rock or not, but he was wearing a ski helmet.

At a news conference, this morning, it was revealed that Schumacher had undergone a second operation to relieve the pressure on the left hand side of his brain caused by a blood clot.  They stressed that he had shown some signs of improvement, but that he remained in a critical condition, with his wife and family at his bedside.

Yesterday, the doctors had explained that he had been “the victim of a various serious trauma… with a grave head injury.  He was very agitated when he arrived and became a lot worse very quickly.  He quickly went into a coma…. He had an urgent operation to release some pressure in his head.  Sadly he has some lesions within his brain.”

“He is critical and still in a coma and will be kept in a coma.  Everything has been done and is being done.  At the moment we can’t say what’s going to happen and when he will recover.  He is in an articifial coma.  He’s undergoing some treatments that are limiting the damage to his brain and we are trying to release pressure in his head… we cannot say anymore and we cannot speculate.  We cannot say what the outcome will be at the moment…. we don’t see that he’s going to need a second operation at the moment.”

Yesterday’s news was especially bleak: “ We can say that he is fighting for his life.  We’re working permanently hour by hour but it’s too early to say what’s going to happen,” they had continued.

When questioned about Schumacher wearing a helmet, they commented: “We think his helmet helped, given the violence which his head hit the ground. Without a helmet he wouldn’t be here now.”

One journalist asked: “Is this an accident that happens a lot when you ski?”

Their response was: “Sadly yes, and we do encourage people to wear a helmet all the time.  Brain injuries do occur quite a lot and we treat a lot here.  Sadly yes, it is a common injury.  The helmet obviously wasn’t enough to protect him completely, but it really did help.”

Schumacher owns a chalet in Meribel and knows the resort and the pistes of the 3 Vallees well.  He is a competent skier and was planning to celebrate his 45th birthday with family and friends in the resort this Friday.

The accident occurred while the grand prix legend was skiing off-piste with friends and his 14-year-old son between the marked runs of La Biche and the more challenging Mauduit, named after the former French skiing champion George Mauduit (as this piste map from The Guardian website shows). They were skiing at an altitude of 2,100 metres, in a tree-free area beneath cloudless blue skies, just 20 metres off the marked slope. 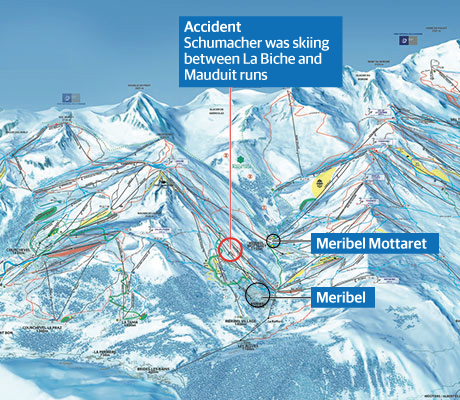