Dozens of tourists, including young children, had to be rescued after being trapped overnight in small cable-cars dangling over the slopes of Mont Blanc, in Chamonix in the French Alps. It took two days to complete the massively complex and dangerous rescue effort amid some of Europe’s highest mountains.

Several cable-cars carrying a total of 110 people were left dangling over the slopes of Mont Blanc, after high winds caused the wires to get tangled.

The 3-mile (5km) cable-car ride connects the Aiguille du Midi peak in France to Pointe Helbronner in Italy, and usually takes around 30 minutes.  It runs during summer months to service the large numbers of climbers and tourists who flock to the Chamonix area. 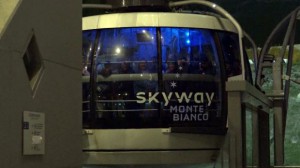 Relieved passengers eventually rode the cable car back to the station

In a dramatic evening rescue, 65 people were winched to safety by helicopters hovering overhead, and 12 climbed down with the help of rescuers using ropes.  But fog then closed in and the remainder – some of the children – had to spend a freezing night trapped 12,605ft above sea level.

They were freed the next day when rescuers were able to restart the cars by relaxing the tension of the tangled cables.  Rescuers were called to a total of 36 stranded cable-cars dotted across 3.1 miles of cable.

The incident comes just five years after 40 people were stuck for nearly seven hours on the Grande-Motte cable-car in south-east France.  They were evacuated through trapdoors in the floor of the cars, down ropes to the ground 40m below.