Eurostar is opening ticket sales for its popular Ski Train this morning – Thursday 31 July – for trains to the French Alps.  You’ll need to set your alarm early and have your laptop fired up ready if you’re hoping to get seats for peak times – Christmas, New Year and February half-term.

This season’s Ski Train – the hugely popular Eurostar direct service from London’s St Pancras station to the French Alps – runs from 19th December 2014 until 11th April 2015.  Fares start from £149 and there’s no extra charge for skis or snowboards.

There’s a Friday overnight service which arrives in the Alps early on Saturday morning, or a Saturday morning departure. Tickets are available from 6.30AM via the EUROSTAR WEBSITE.  Their call centre opens at 8am for telephone bookings.

The journey to the French Alps starts with a 30-minute check-in at either St Pancras station in London or in Ashford, Kent.  The route heads directly to Moutiers (for the Three Valleys), Aime (for La Plagne) and Bourg St Maurice (with connections to Les Arcs, La Rosiere, Tignes and Val d’Isere).

From here, it’s just one hour maximum to transfer to resort, unlike the lengthy transfers (up to 4 hours) if you fly into Geneva.  Note, however, that if you’re travelling to La Plagne, you need to get to either Bourg St Maurice or Moutiers for the return trip.

Sales of Eurostar tickets for the daytime service to Switzerland (to Geneva via Lille) are this year being delayed until the end of September.  This equally-popular service was introduced in 2012, as we reported in an earlier story HERE.  It just involves one speedy connection at Lille, onto a TGV train which stops at Vallorbe, Aigle, Martigny, Visp and Brig, providing easy access to such Swiss resorts as Verbier, Saas-Fee and Zermatt.  The service will run Monday, Thursday, Saturday & Sunday weekly throughout the season, starting in December.

The Ski Train is so popular that it is nearly always sold out.  But, don’t despair!  It is possible to reach the French, Swiss and Austrian Alps by train using regular timetabled services virtually every day in the season.

What’s so good about the Ski Train?
Apart from the obvious environmental appeal, there are several advantages: unlike airlines, there are no charges for carrying ski equipment; kids have more space to move around; and – best of all – if you take the overnight train (not recommended for tinies but great for families with older children), you get a couple of extra days on the slopes. 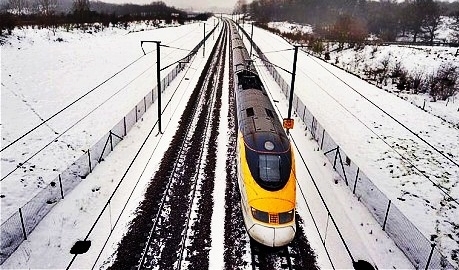 However you chose to travel – by plane, car or train – here are some handy ideas on HOW TO AMUSE THE KIDS EN ROUTE.