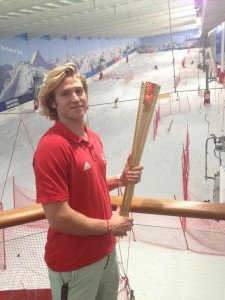 As the UK’s largest real snow training slope, The Snow Centre is well placed to create their greatest ever Ski & Board Cross course this weekend, with the support of British Ski Cross Olympic contender Ed Drake.  And on Monday, Ed will be offering recreational family skiers (and young Olympic hopefuls) a special day of race training, as we reported in an earlier story here.

This Monday, Ed is inviting all budding skiers and boarders to come to a day of training at The Snow Centre, where he will be providing expert tuition and an insight into the relatively new sports of Ski and Boarder Cross.

Ski Cross was first included in the Olympic Games in Vancouver 2010.  The pure start to finish course allows skiers to race head-to-head over the same turns, bumps, slopes and wu-tangs – making for highly exciting viewing.

To take part in Ed’s Ski & Boarder Cross training session on Monday, all you need to be able to do on your skis/board is: to be able to control your speed and direction; to perform linked turns; to use a button lift unassisted; and to be able to stop!  Adult Lift Pass prices on the day start at £23.20 and Junior Lift Passes start at £20.  Skis and snowboards are available to hire too, so bring everyone along for a great day out for all the family, and to test out their ski racing skills against a pro!

Just hit the slopes with Ed between 10am – 5pm on Monday to give Ski & Boarder Cross a go, and to glean some hints and tips from the British Olympian. 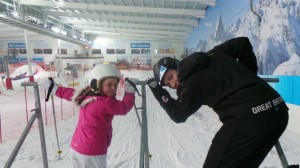 Come and have a go… race against an Olympic pro!

“This is a fantastic opportunity for anyone, novices to budding pros, to come done and have some competitive fun.” said Ed.

“The open session will be a great chance for people to try their hand at Snowsport in a different way, ” he continued.  “The coaching session will be excellent too – I’ll be keeping an eye out for any future Olympians!”

To find out further details about the day with Ed, click here.

All images (c) The Ski Centre