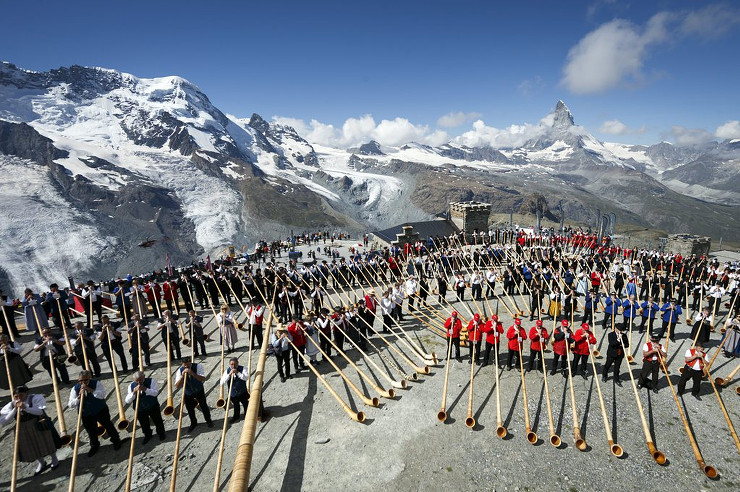 Over 500 alphorn players assembled on the Gornergrat ridge near Zermatt last week to break the world record for the largest ever alphorn group performance.

Five hundred and eight musicians from Switzerland and beyond – many dressed in traditional costumes – gathered against the spectacular backdrop of the Matterhorn and 28 other peaks above 4,000 metres.  They assembled to play a piece composed especially for the occasion by Gilbert Kolly on Saturday. 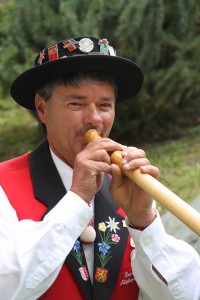 Our friend Martin Biner, from Zermatt

Among them was FamilySkiNews.com’s friend and celebrity Swiss alphorn player, Martin Biner (we think he’s one of the players in a red waistcoat in the bottom right of the photo above).

This alphorn gathering beat the previous 2009 record in the same place by 142 participants.

Just imagine getting so many alphorns up a mountain…  Needless to say, the event was not without its difficulties however:  The first problem was to find a place where the conductor could be seen by all the performers.  And some of the musicians had difficulty controlling their breathing – vital for playing the alphorn! – at such a high altitude. Gornergrat is 3,089 metres above sea level. 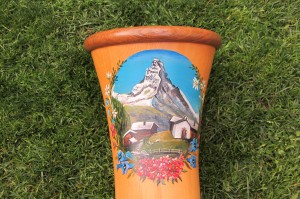 A painting of the Matterhorn graces Martin’s alphorn

The alphorn has been used for a variety of purposes ever since the 16th century – most frequently by herdsmen to communicate across neighbouring Alps and to call their cows back for milking.  It was also sometimes played on summer nights in the Alps as a form of prayer in Protestant regions.  It seemed fitting, therefore, to break the world record atop the Gornergrat, which boasts one of the finest panoramas in the Alps.

FamilySkiNews were up the Gornergrat just one week previously.  Sadly we couldn’t stay for the alphorn fest though!

Send your kids to Snocamp