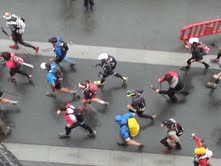 The start of the Irontrail 2013, right outside our hotel window in Pontresina!

The Swiss Iron Trail 2013 has taken place in Switzerland, in the picturesque canton of Graubünden.

It is the longest, toughest, highest altitude and, arguably, most beautiful single-stage trail of the Alps and is being billed as one of Europe’s ‘must-run’ events.

FamilySkiNews.com was there at the start in Pontresina.

It was the start of a monumental four-day trail for a total of 447 runners, that included 11,500 metres of vertical ascent and 12,700 metres of descent, between the towns of Pontresina/St Moritz and Davos.

The event was introduced by Andrea Tuffli, race-director of the Swiss Iron Trail (SIT2013), who first introduced mountain running to Switzerland 28 years ago by organising the SwissAlpine in Davos – an off-road event of 79 kilometres over a mountain pass through dazzling mountainscapes.

Last year, the inaugural event had to be cancelled after the first day, due to adverse weather conditions.

This year, the runners were able to complete the trail – running through countryside that has inspired the likes of painter Giovanni Segantini and philosopher Friedrich Neitsche, and hoping to earn the highly-deserved title ‘King of the Mountains’ – like the wild ibex on the event’s logo and the cantonal flag for Graubünden. 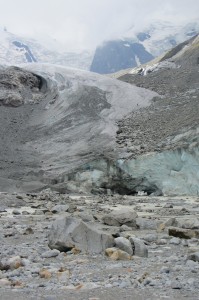 Crossing the Morteratsch glacier en route up the Diavolezza

The vast, wild and multi-faceted expanses of Graubünden were inspirational terrain for the runners, .  Most of the routes were on alpine trails and jeep tracks, with some major mountain passes and glaciers to overcome en route, especially near the start of the route.  Some of the scenic highlights and more challenging, technical sections of the Swiss Irontrail included the ascent to the Diavolezza and a glacier crossing; the Fuorcla Pischa ridge/ibex trail; the Piz Nair (at 3022 metres, the highpoint of the trail) the Pass di Orgels (through the ‘Graubünden Dolomites’) and the many lakes on the descent from the

The trail stretched from Pontresina via Samedan, Savognin and Lenzerheide to the finish line in Davos.  It was split into 4 sections with different starts over the three days from 9-11 August.  The ultimate category (and first start, in Pontresina on 9 August) covered a remarkable 201.4 kilometres – an unbelievable distance for a single stage event!  The weather conditions were less than ideal with heavy downpours, but that didn’t deter too many of the runners.

The start-gun went, at 8am, right outside our hotel in the main street in Pontresina.  Of 170 runners registered for the 201km leg, 130 were actually present at the start and just 36 made it to the finish. 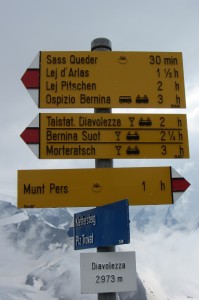 The second start (in Samedan on 10 August) covered 141km; start three (in Savognin) totalled 81km, and included some of the steepest sections; and start four (Lenzerheide to the finish in Davos) was 41km.

Although a number of runners were unable to complete the trail, the winner of this impressive and epic race – crowned ‘King of the Mountains’ – was Andreas Allwang from Munich, who recorded a time of 38 hours, 14 minutes and 57 seconds.  He was 26 minutes faster than second-placed Czech runner Petr Mil and 36 minutes faster than third-placed Japanese Soyogo Aoyagi.

As he crossed the finish line exhausted but elated, he cried out to the applauding crowd: “Thank you, thank you.  Sorry I’m running a bit late!..”

As the popularity of such long-distance running trails grows worldwide, the organisers are hoping to attract over 4,000 competitors by the event’s fifth year.  Given the magnitude, distance and highly demanding nature of the Irontrail, it appeals predominantly to more experienced single-stage ultra-trail runners, such as participants for the Ultra-Trail du Mont-Blanc.  For information on SIT2014, email info@swissirontrail.ch.