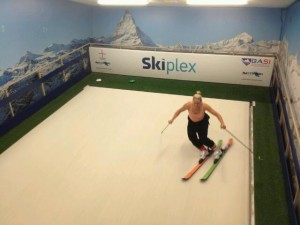 Chemmy Alcott – putting in the turns at Skiplex

Head to Skiplex in Reading this Sunday (6 October) to join two of Britain’s top ‘ski celebrities’, Chemmy Alcott and Graham Bell, for an Olympic-themed family fun day out.

Skiplex’s Slide2Sochi Sunday is providing families with the chance to get coaching tips from both Chemmy and Graham, as well as skiing or snowboarding for free or for hugely discounted prices on the endless slopes of the Skiplex.

The day out is part of a new Slide2Sochi campaign, which we reported on last month at the launch.  Its aim is to get as many people exciting about next year’s Winter Olympics and to get actively involved in winter sports.

Skiplex Marketing Manager Cordelia Kerr said: “We are hugely excited about our Slide2Sochi event with Chemmy and Graham. It will be a great opportunity to get people buzzing about the upcoming Winter Olympics and for people to come and see what Skiplex is all about. The nature of the revolving slopes means that everyone will be able to get involved with the skiers, whether on or off the slopes so the centre should be alive with Olympic fever! It doesn’t matter if you’re a beginner or advanced skier, Skiplex is the perfect place to come and enjoy your skiing and support our athletes.”

For those unfamiliar with Skiplex, it is a whole new way of dry slope ski training –  perfect for learning how to ski or snowboard, or for getting your ski legs back before your winter holiday, or to fine tune technique.  The revolving slopes are made of a forgiving carpet-like material which is much softer than the traditional dry slopes and the speed and gradient can be cleverly altered to suit all abilities.  We recently sent one of our reporters, Briony Key, to try it out in one of the three Skiplex centres in the UK (in Chiswick and Basingstoke, as well as Reading).  You can read her report here.

Also on Sunday, Slide2Sochi’s giant snowball will be at Skiplex for you to sign with your very own personal good luck message for the British winter-sports athletes winging their way out to Sochi for the start of Winter Olympics next February.

Staying with the Olympic theme, kids can also have their faces painted with their favourite country’s flag at Skiplex on Sunday, and find out more about how to get involved with wintersports themselves.  There will also be a big barbeque and plenty of après ski atmosphere.

Get your kids to bring their autograph books for Chemmy, Britain’s number one downhill skier, and Graham of BBC Ski Sunday fame to sign.  It’s always inspirational for kids to meet some of their sporting heroes face-to-face rather than just on the telly! 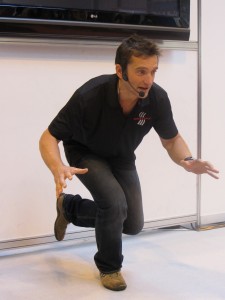 Chemmy Alcott is already looking forward to the day out: “I am really excited for the Slide2Sochi event at Skiplex on the 6th October – its a great way for the public to get involved with us, the athletes, and experience the latest way to learn to ski at Skiplex. It should be a great day and I am looking forward to seeing everyone there!”

While Graham remarked: “I’m looking forward to meeting loads of budding skiers and snowboarders at the Skiplex Reading and hope they’ll all be looking forward to watching the Sochi 2014 Olympics in February & March 2014 where I’ll be presenting the television coverage from the mountains.”

To book slope time for Slide2Sochi Sunday THIS SUNDAY call 08456003599 or visit the Skiplex website here.

Other recent posts:
Chemmy has new sponsor for Sochi
Skiplex: Improve your ski technique
Star-studded skiing line-up at Snozone tomorrow
Thomas Cook – a new look
Ski bookings are up this winter
Skiing celebrations for 90-year-old Polish war veteran
Ski lessons for a fiver
Fancy having a go at skiing or snowboarding?
Racing on indoor snow

Chemmy has new sponsor for Sochi