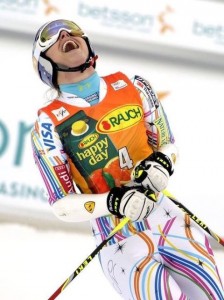 She also won the downhill and super-combined World Cup titles earlier this season and is the favourite for the Super-G finals in Schladming, Austria, next week.  After her convincing win in Ǻre’s GS race, Vonn remarked “I’m just thrilled. It’s crazy, I could almost go on holiday in Schladming.”

On Facebook, she added “Oh my gosh, I won the GS race today in Sweden!! I was also able to clinch the Overall World Cup title – what a day!!”

27-year-old Vonn is the first American skier ever to win four overall titles, making her the greatest Alpine skier in US history.