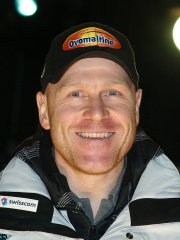 Nearly 8 inches of snow fell overnight in Kitzbuehel threatening the cancel Saturday’s prestigious Hahnenkamm downhill – the highlight of the World Cup calendar, considered by many skiing’s most difficult and prestigious race.

It did however take place, in front of a crowd of 30,000 fans, with a shortened course and with tough skiing conditions, due to the unrelenting snowfall.

It was won this year by 37-year old Didier Cuche, just two days after unexpectedly announcing that he would retire after this season. It was a record-breaking fifth Hahnenkamm victory for the Swiss skier. The results were close, with the top nine out of 63 racers all finishing within half a second of Cuche. “It’s a dream. I can’t believe it. Winning five times here is just incredible. I can’t find words to describe that” he said.

After the race, 58-year old Austrian skiing legend Franz Klammer (who had shared the record of four victories here) shook Cuche by the hand claiming “Cuche is now the King of Kitzbuehel. It was a fantastic win for Didier. He was incredibly fast and attacked the course even though there was bad light. He was outstanding.”

Earlier this month, Cuche was named “Swiss of the Year” despite failing on his 13th attempt to win Switzerland’s biggest skiing event – the Lauberhorn downhill at Wengen. He has in his career, however, amassed a staggering 18 World Cup wins, 61 podium places and 171 top 10 finishes; one gold, two silvers and four bronzes at World Championships; and an Olympic silver in Nagano, Japan in 1998.