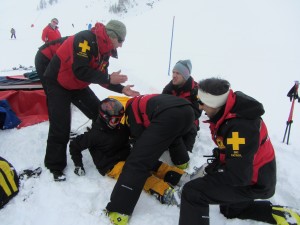 According to the American Journal of Sports Medicine, “participation in snowboarding as a winter sport is comparable to alpine skiing” when it comes to risk or injury – a conclusion based on important differences in injury patterns between snowboarders and alpine skiers which are, in turn, affected by age, experience and sex.

The report, published on 20 January 2012, based its assessment on date collected on injured snowboarders and skiers in a base-lodge clinic of a ski resort in Vermont over 18 seasons.  They studied a total of 12,000 injuries.

Overall, it was concluded that snowboarders were more likely to get injured than skiers, although skiing injuries were frequently of a more serious nature, requiring longer rehabilitation.  The highest rate of injury was in young, inexperienced, female snowboarders.  Interestingly, 21.8% of snowboard injuries occurred in the terrain park, compared with 6.5% of ski injuries.

Cheap flights to the Alps