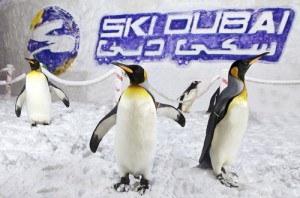 Posing for the camera at Ski Dubai

If it isn’t extraordinary enough to have a gigantic artificial-snow ski resort constructed in the middle of the desert, then the addition of penguins to the Dubai Ski Centre has to be the icing on the cake.

Before arriving in the UAE, the 20 penguins were part of a breeding programme at SeaWorld in Texas.

They are a mixture of king penguins (the second largest type) and gentoo penguins – easily identifiable by a wide white stripe across their heads.

The colony took up residence at the world’s largest indoor snow park last month, in a specially-built housing area and pool resembling an Antarctic environment; with a staff of 13, including a ‘penguin curator’ to cater to their every whim.

“The penguins live like they have their own 13 personal butlers,” reported Tom Scheffer, Ski Dubai’s operations manager in The National, the UAE’s English-speaking newspaper. “A vet comes every two weeks. They have their own lunch boxes, with restaurant-quality capelin fish imported from Canada.”

Critics claim Ski Dubai only acquired the penguins for profit.  Mr Scheffer, however, insists the project is more than just a commercial enterprise, claiming “We’re also raising awareness about the conservation needed to sustain their natural habitat.”

Now that the penguins have settled into their new sub-zero home, families to the snow park can witness a daily ‘March of the Penguins’ and observe them enjoying their snowy surroundings.

You can also book a ‘Peng-friend experience’, involving a special underwater viewing and a play/training session with Squeaky, Pebbles, Pumpkin, McFatty and all your other new found peng-friends.

Here’s a film of them arriving at the Snow Park: