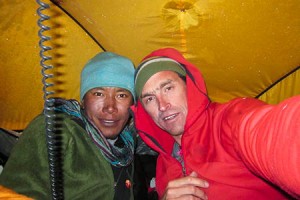 They are the first mountaineers to achieve all three peaks in a single trip.

Before the ten-day expedition started, he told the BBC: “I’m not sure if it is possible to climb all three of these monsters in one go, but that’s surely the best reason of all to try.”

“I’m hoping that I will be able to climb all three mountains without returning to base camp, but for that I’m going to need a bucket load of good luck and a heap of good weather.”

Yesterday, they achieved their goal, as Kenton announced on Facebook: “LHOTSE HAS BEEN SUMMITED. DESCENT HARD. NOW AT CAMP 2 FOR THE NIGHT. THREE SUMMITS IN THREE DAYS. NUPTSE, EVEREST,LHOTSE. THE FINISHING LINE OF BASE CAMP IS IN SIGHT.”

The timing for this extraordinary feat is perfect – next week marks the 60th anniversary of Tenzing Norgay and Edmund Hillary’s first successful ascent of Everest in 1953. 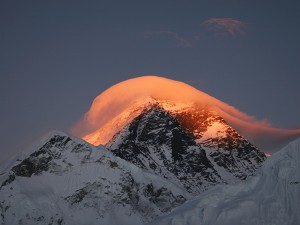 Top of the World – Mt Everest

Of course, Gloucestershire-based climber, Kenton is no stranger to Everest.  In fact, this was his 11th time at the summit (more times than any other British climber).

Last year, also accompanied by Dorje Gylgen, he took up the Olympic gold medal to fulfil a pledge made by Arther Wakefield for his part in the unsuccessful 1922 British Everest expedition.  You can see the full story by clicking here.

Four hours ago, having safely reached Base Camp and the conclusion of the expedition, he reports: “Back down in BC totally shattered like never before after a week in high mountains. Will update with photos tomorrow…now it’s rest.”

One hundred not out… and still skiing!