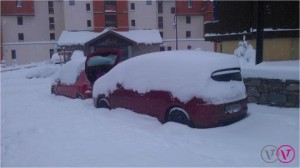 It’s snowing again in the Alps, and loads more of the white stuff has fallen this weekend as a cold Arctic front moved in, bringing with it sub-zero temperatures.

Here at FamilySkiNews.com we’re getting very excited, dusting off our salopettes and turning all our attention to the forthcoming season. 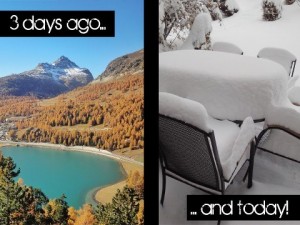 Changeable weather in the Engadine

However, conditions can be very changeable at this time of year.  Much of the heavy snowfall last week in the Central Alps that we reported here has already melted, and this new snow is really rather a waste so early on!

That said, the weekend’s cold snap and the massive dump of snow does serve to remind us all that the ski season is just around the corner.

Indeed, a number of resorts already have runs open on the glaciers.  Several glacier ski areas opened last weekend.  Currently the following resorts have runs open on the glaciers: Tignes in France; the Titlis glacier above Engelberg, the Diavolezza glacier near St Moritz, and the glaciers at Zermatt and Saas-Fee in Switzerland; Val Senales and Passo Stelvio inItaly; and Hintertux, Kaprun, Kaunertal, Molltal, Pitztal, Stubai and Sölden in Austria. 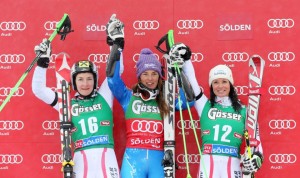 The snow is especially timely in Sölden, as the World Cup season started this weekend on the Rettenbach glacier with the women’s giant slalom on 27 October, won by Tina Maze (pre-race favourite Lindsey Vonn skied out on the second run!); and the men’s giant slalom today, won by Ted Ligerty by a remarkable 2.75 seconds.

This weekend some of the pistes at Les 2 Alpes have also been open, and its ancient but iconic ‘red egg’ ski cabins went under the hammer at auction, as we reported in our story An Egg-stravagant Purchase.  The glacier at Les 2 Alpes will be open for 9 days for half term from 27 October until 4 November.

In Italy, Cervina opened yesterday full time for the season, right through until 5 May 2013.

Further north, in Scandinavia, the Finnish resort of Ruka has been open for over a week already, thanks to their ultra-efficient snowmaking facilities.  The resort is open for eight months – the longest season of any non-glacier resort.  It opened on schedule this year.  Last year it was one month late due to the unseasonably warm weather.  Fingers crossed its punctual opening is indicative of a good winter to come!

It’s even been snowing in Scotland– at Glencoe Mountain Resort.

So don’t let the cold get you down over the next few days …. Simply wrap up warm, try our delicious warming soup from the Aosta Valley– Zuppa Valdostana– one of our new series of alpine recipes – and get dreaming of your forthcoming family ski/boarding holiday.

Ruka – now open until May!

Bollywood in the Alps