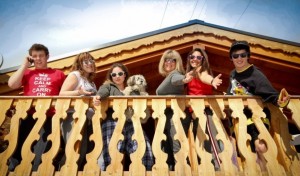 The problems began last month when a group of seven chalet staff – dubbed the “Les Menuires Seven” – barricaded themselves into a luxury 12-bedroom chalet in a row over pay and unfair dismissal.  They worked for the niche ski company Skithe3V, which had fired them immediately after the half-term holidays, effectively leaving them stranded in the Alps.

The dispute began after the company owner Mark Ridgers sent out a blanket email to its employees informing them that they were all being fired for a number of misdemeanours, and that they wouldn’t be receiving pay for any of the hours worked since they had arrived in the resort at the beginning of February.

The seven seasonaires were given just 12 hours to evacuate their accommodation.  Chalet Georgina – one of three chalets then operated by Skithe3V – was being run by David and Hayley Haines, who were also sacked without reason, although they were offered reduced pay.  They decided to support the cause of their young colleagues, allowing them to move into the chalet until all of them had been paid their full dues.

Despite an eventual agreement to pay the outstanding wages, the date for payment (29 February) came and went with no payment.  One of the LM7, Aanya Madhani, confirmed last week to the Evening Standard that dues of up to £1500 per seasonaire are still owing, contrary to orders from French authorities.

The firm’s website has been shut down and its Twitter account deleted.  However, you can follow the seven seasonaires’ story on Facebook at http://www.facebook.com/pages/Les-Menuires-7/135799119875601 or on Twitter at http://twitter.com/LesMenuires7.  With salaries still outstanding and the company’s doors firmly closed to trading, the repercussions of this situation could well affect British-based chalet operators who recruit and pay workers in theUK.

Skithe3V do not appear to be listed on ABTA, an organisation which provides consumers with protection against the financial failure of their travel company.  One client, Gary Nurse, who was due to fly out to Les Menuires with 17 friends this season, reported to the Evening Standard: “From a legal standpoint I don’t know whether we’ll be able to get any of the money back… with this kind of holiday when you book over the internet, you email, you talk to them and you trust it will all be okay.  I guess it’s a lesson for us to be less trusting.”

In the light of this, FamilySkiNews.com urges holiday-makers to ensure that their chosen ski operator is ABTA-bonded, and that they have adequate, up-to-date, fully-comprehensive winter sports insurance to cover every eventuality whilst abroad.  Readers of FamilySkiNews.com are entitled to 10% off winter sports insurance with one of our specialist insurance partners, ERV.  Book it here, using promotional code FAMILYSKI10 to receive your discount.

NOTE: Skithe3V is not to be confused with the Courchevel-based chalet company Ski 3V, which is enjoying its twentieth year of business offering first-class catered and self-catering holidays in Le Praz.

Chemmy plans to ski again in May