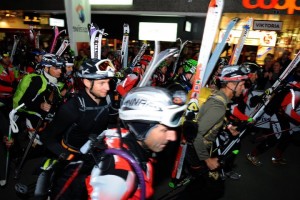 The start of the 2012 Patrouille des Glaciers

On Thursday, the celebrated 3-day Glacier Patrol (Patrouille des Glaciers) race began in Zermatt and Arolla – a gruelling ski mountaineering race, organised every two years by the Swiss Army, in which Swiss Army and civilian teams compete in what is considered one of the toughest high mountain trail ski competitions in the world.

The race routes lead from Zermatt to Verbier (course Z) or from Arolla to Verbier (course A), following the famous Haute Route, and must be completed in one single stage. It is a phenomenally tough endurance competition, characterised by its length and the extreme challenges of the altitude and the alpine environment.

Even though the skiers race at night when the snow is more stable, this year’s race had to be cut short midway, due to dangerous snow conditions. Following some unexpectedly warm weather on Friday that continued through the night, the racers were turned back shortly before 0430am yesterday, after a safety team checked the snow conditions and deemed them too unstable to continue. 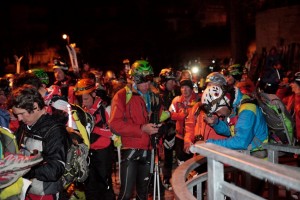 Utmost disappointment after months of training

More than 600 teams (just over one-third of all competitors), most of whom had been in training for two years to take part in this epic race, had already begun the race in Arolla and in Zermatt before they were turned back.

The last time a PDG race was commenced but had to be cancelled was in 2002.

Naked backflips in the snow